Liz and Dick: The Cheneys are Back — but Why? 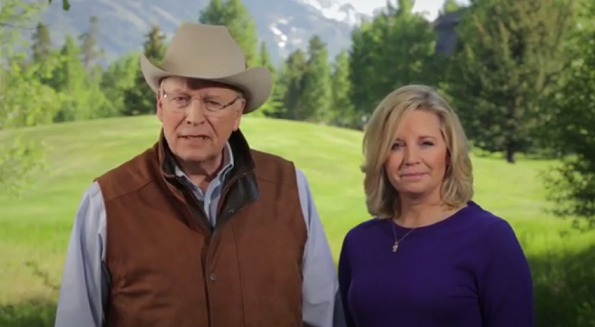 The last time Liz and Dick created this much fuss in the press, it was on the set of Cleopatra, back in the 1950s. I wish I were speaking of Richard Burton and Liz Taylor, but unfortunately, I'm referring to former Vice President "Deadeye" Dick Cheney and his mind-melded daughter, Fox News contributor and failed Senate candidate, Liz Cheney.

The Cheneys "co-authored" an editorial in the Rupert Murdoch owned Wall Street Journal called "The Collapsing Obama Doctrine," in which they stated, "rarely has a U.S. President been so wrong about so much at the expense of so many." I don't often read the WSJ since I lost my money in the Bush Recession, but when I read that particular sentence, I had to lean back in my chair and take a few deep breaths at the deaf, dumb, and blind hypocrisy of the head designer and chief promoter of the Iraq War.

Even Fox News' Megyn Kelly seemed incredulous during an interview on a network that's usually obsequious to Liz and her dad. When Cheney was asked if the same question might be directed at him after such previous statements as "we would be regarded as liberators in Iraq," and "the insurgency is in its last throes," he replied without a trace of shame: "We inherited a situation where there was no doubt in anybody's mind about the extent of Saddam's involvement with weapons of mass destruction. We did the right thing."

No doubt in anybody's mind? There was doubt in everybody's mind who could see through Dick Cheney's master plan to march this country into an unnecessary war. Now that American troops are gone and Iraq is dissolving into chaos, Cheney, along with his personal bad seed, is trying to deflect blame everyplace but where it belongs: in his bloody hands.

He lashed out against fellow Republican Rand Paul for stating that trying to blame Obama for the Iraq disaster was misdirected, and blasted Bill Clinton for whatever reason he could come up with. The Cheneys contended, "On a trip to the Middle East ... we heard a constant refrain in capitals from the Persian Gulf to Israel: 'Can you explain why your president is doing this? ... Why is he so blithely sacrificing the hard-fought gains you secured in Iraq?' Liz and Dick continued, "Mr. Obama ... abandoned Iraq, and we are watching American defeat snatched from the jaws of victory."

One shabby, lazy, old journalistic trick when you wish to forward an opinion but can't get anyone to speak on the record is to write, "Some people say," or, "It has been stated in certain quarters." This allows you to imply defamatory quotes made toward your intended target without actually quoting anyone. It says as much about the Cheneys' deception as it does about how corrupt the Wall Street Journal's editorial department has become under the ownership of NewsCorp.

Does anyone who was awake for the past six years believe that the Bush administration handed Obama a victory in Iraq? This evil war has cost 4,500 American lives, trillions of dollars, and untold hundreds of thousands of Iraqi civilian casualties, yet Cheney still considers it "the right thing to do"? The WSJ "take your daughter to work day" editorial continues: "Despite the threat to America unfolding across the Middle East, aided by his abandonment of Iraq, he (Obama) has announced he intends to follow the same policy in Afghanistan."

If memory serves, Obama won election and reelection on the pledge that he would put an end to the Bush wars. In Cheney's eyes, victory in Iraq means a pliable puppet government and a permanent U.S. military presence to safeguard the oilfields that were supposed to pay for his misbegotten war. Cheney declares, "Al qaeda and its affiliates are resurgent and they present a security threat not seen since the Cold War," with the same assurance that he proclaimed, "Simply stated, there is no doubt that Saddam Hussein now has weapons of mass destruction."

Many pundits on the right still take Cheney seriously, but he's lost Glen Beck. On his radio show, the cherubic prophet of the apocalypse proclaimed: "Liberals said, 'We shouldn't get involved, we shouldn't nation build.' They said we couldn't force freedom on people ... You are right, Liberals, you were right."

Fox News gave the Cheneys a second joint interview, perhaps to assuage hurt feelings caused by Megyn Kelly, only this time it was to announce the formation of The Alliance for a Strong America, a grassroots organization founded, according to Liz, "because we know America's security depends upon our ability to reverse President Obama's policies." While Liz dressed in all black, Dick sported a white cowboy hat and an oilskin vest, causing them to appear more like American Gothic than Roy Rogers and Dale Evans. All that was missing was the pitchfork.

Speaking from Wyoming, where Liz steamrolled her own sister while cozying up to the ultra-right in her losing Senate bid, the new Cheney "alliance" looked more like an attempt to shore-up Liz's rabid-conservative bona fides for another run for Congress. Cheney claimed the group's purpose is "to restore America's power and preeminence" in the world. "President Obama has repeatedly misled the American people about the attacks in Benghazi and the true nature of the threat we face."

Oh. I get it now. Benghazi. This is about fund-raising for the next election. "Benghazi" is like catnip for right wing pussies, and I mean that strictly in the "fat cat" political contributor sense of the word. But when it comes to Liz Cheney's credibility, this silly drama can't come close to matching a Shakespearean production co-starring Liz and Dick that I would much prefer seeing: The Taming of the Shrew.