The She Shed Food Truck: Not ‘Girly Food’

Get ready for The She Shed to tootle down the street.

The pink food truck, slated to open in September, will be manned by Kathleen Barth and MK Dunston.

"It looks like a little cottage on wheels," Barth says. "Kind of a rosy pink. It'll have ivy on the outside. Very girly. But not girly food." 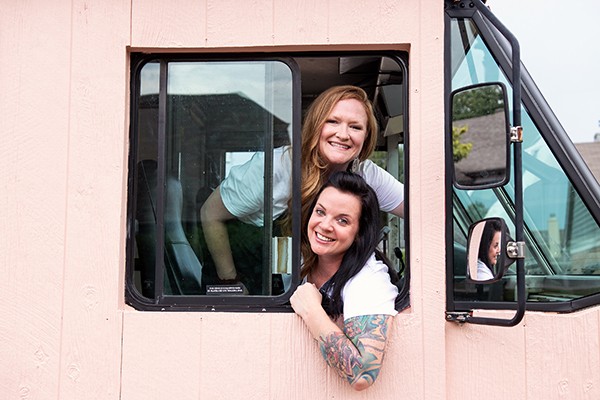 They'll specialize in "big-ass man sandwiches," she says. "A sandwich that you've got to do the hunch. When you're getting ready to take a bite, you've got to get your sandwich with both hands and make sure you're not going to get it all over your belly or your boobs. Brace yourself, open up that trap, and munch. That's the hunch."

This began last April when Dunston saw a photo of one of Barth's creations on Facebook, and then saw Barth's other food posts. Everything looked like something she would make. "We have exactly the same cooking style," Dunston says.

"Rustic is a great word," Barth says. "We plate our food the same. We stack things — your carb on the bottom, potatoes, rice, then your veggies and proteins on top."

After corresponding for a few weeks, Barth asked Dunston if she wanted to go halves with her on a food truck. The truck originally belonged to a woman who planned to use it for her dog rescue business. "She turned it into a giant-ass doghouse on wheels," she says. "It actually has a roof with shingles."

A month later, Barth and Dunston met each other in person. "I just sent her a message via Facebook and asked if she wanted to hang out one day and cook together," Barth says.

"We gave each other a hug like we knew each other forever," Dunston says.

Barth, owner of 901 Thyme Catering, began cooking at home about eight years ago. "I like to cook Italian, Mediterranean style. I like a lot of Asian influences. I really like to cook all the regions."

Last year, Barth worked with Spencer and Kristin McMillin when they were at Caritas Village. "He's kind of been my mentor. He taught me a lot of technique. It was an honor to work with both of them."

When the pandemic hit, Barth and Dunston were involved with Caritas' Feed the Frontline program where chefs fed more than 2,000 meals to front line workers and people in the community.

When she was 10, Dunston began cooking for her siblings. "First thing I ever made was country fried steak with gravy," she says. "I watched my grandmother make it 100 times. I was convinced I could do it. I screwed up the gravy at first, but I figured it out. When I became a grown person and started having babies, I figured I'd better learn how to cook all these things so I could feed the kids."

Last November, Dunston began making food people could order online. "I would just put out one plate, and people would order that."

She worked as a bartender/manager at Blue Monkey until the pandemic hit. "After quarantine started, I thought I should kick food into high gear. I wasn't sure how I was going to earn money. That's when I launched Barricade Breakfast, Lockdown Lunch, and Quarantine Cuisine. I started doing breakfast, lunch, and dinner every week."

The Frenchy, one of Dunston's items, will be included at The She Shed. "It's like French dip and French onion soup had a baby," she says. "It's a slow-roasted shaved prime rib topped with roasted black pepper, Gruyere cheese, and caramelized onion on sourdough, served with a side of au jus."

Another will be Barth's signature dish — a garden veggie pie, which she describes as "like a classic tomato pie," but with zucchini, fresh herbs, and topped with a cheese blend.

Desserts will include Dunston's pecan blondie with Southern pecan ice cream and a Khalua drizzle.

The She Shed will travel "wherever anyone will have us," Barth says. "Anywhere they want man sandwiches."