Denzel Washington rides to the rescue of this by-the-numbers remake.

2016 has had more than its share of remakes, both good (Ghostbusters) and not so good (The Jungle Book). Director Antoine Fuqua's version of The Magnificent Seven gives us something new: A remake of a remake.

I'll cut Fuqua a little slack here: People have been remaking and reimagining the Seven Samurai practically since the moment Akira Kurosawa locked picture. First up was John Sturges' 1960 western The Magnificent Seven starring Yul Brynner, Steve McQueen, and five others, which made "assemble a team of misfits to perform a seemingly doomed and intractable task" a thing in American film. Then there was The Guns of Navarone, which put Gregory Peck and David Niven in charge of a group of misfit soldiers in World War II (It had a sequel starring Harrison Ford). The Dirty Dozen kept the World War II motif and postulated, if seven is good, 12 must be great! In 1980, Roger Corman cashed in on the Star Wars craze with Battle Beyond the Stars, which he successfully pitched as "The Seven Samurai — in space!" Pixar got into the act with A Bug's Life. The upcoming Star Wars film Rogue One features a group of misfits recruited by the Rebellion to steal the plans for the Death Star. Guess how many people are on the rebel team!

Standard operating procedure is to give your Seven Samurai remake a different title, but this is 2016 Hollywood we're talking about here, so we're sticking with The Magnificent Seven. Taking up the leadership mantle left behind by Yul Brynner is Denzel Washington as Sam Chisolm, a tough but fair bounty hunter whom we meet single handedly busting up a saloon as he brings an evildoer to justice. Denzel (who is one of those actors whose reputation is so huge you only have to use his first name) sports the same all-black cowboy getup as Brynner and some impressive frontier facial hair. This is the kind of action role he's mostly been relegated to in the last decade or so, which is kind of a shame, because the Malcolm X actor could use some good juicy parts besides Flight. Denzel's been phoning it in the last few movies — most notably in director Fuqua's 2014 snoozer The Equalizer — but there's more pep in his step this time around. Denzel looks like he's having fun riding high in the saddle through the Painted Desert. 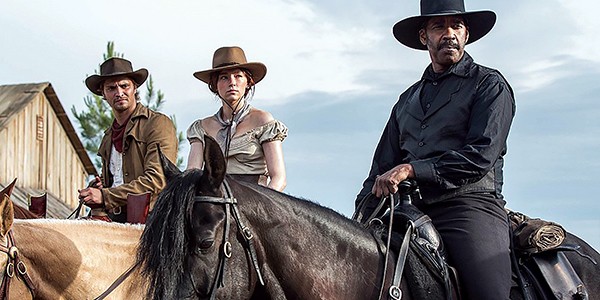 Denzel's opposite is Peter Sarsgaard as Bartholomew Bogue, a well-heeled mining magnate who aims to clear out the little frontier town of Rose Creek so he can extract the mineral wealth underneath it without paying any pesky royalties to the landowners. The film opens with the town's denizens debating their best course of action in Rose Creek's idyllic clapboard church, and Fuqua gives Bogue a mustache-twirling entrance, ringed by shotgun-toting heavies. It's the first sign that this is going to be an old-fashioned, Western shoot-'em-up with well-defined good and bad guys. One of the casualties of Bogue's opening strong-arm tactics is the husband of Emma Cullen (Haley Bennett); as she sets out to find armed help, she's moved at least as much by revenge as she is by saving the town.

The other notable members of the band of seven heroes include Chris Pratt as Josh Faraday, a gambler who is pressed into service when Chisolm gets his horse out of hock. Pratt's job, like Toshiro Mifune in Seven Samurai, is to provide a side order of comic relief to the relentless gun-toting heroism. Ethan Hawke plays a former confederate sharpshooter named Goodnight Robicheaux as a PTSD case seemingly held together only by the marijuana cigarettes his sidekick Billy Rocks (Byung-hun Lee) provides at crucial moments. Vincent D'Onofrio's Jack Horne is a tracker who is introduced just after receiving a major head injury, and he plays it to the hilt by quoting jumbled, half-remembered biblical passages. It's inevitable in a cast this size that some of the members are going to get short shrift, and that's what happens with Vasquez (Manuel Garcia-Rulfo), the Mexican outlaw, and Red Harvest (Martin Sensmeier), the Comanche warrior.

The best way to sum up this Magnificent Seven's strengths and weaknesses is to say that it's an old-fashioned Western, with all that implies. Fuqua and company construct some killer action sequences, and at least make a nod toward multiculturalism with the integrated cast. But it doesn't expand the genre in a significant way like Clint Eastwood did with The Unforgiven, and it lacks the verve of the Coen brother's True Grit remake. Ultimately, it's the reinvigorated Denzel Washington that makes this worthwhile, if not essential, viewing.