Remember "supermarket tabloids"? They were called that because when you stood in the checkout line at the grocery store, you were invariably confronted with a rack of newspapers featuring headlines such as: "HILLARY CLINTON ADOPTS ALIEN BABY!" Or, "BIGFOOT KEPT LUMBERJACK AS SEX SLAVE!" Or, "DICK CHENEY IS A ROBOT!" (All actual headlines, by the way.)

There was the Star, the Weekly World News, The Sun, and, of course, the still extant National Enquirer, most recently famous for burying stories about former President Trump's extramarital liaisons. 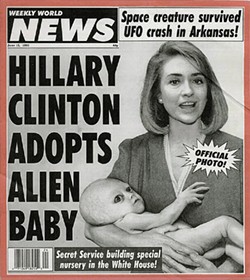 I like to think most people who saw these tabloids in the checkout line back then were like me — they chuckled, rolled their eyes, maybe even bought a copy of a particularly outrageous issue ironically, thinking "Who the hell would believe this?"

But the tabloids sold millions of copies a week in their prime, and they weren't all being purchased ironically. Some people bought tabloids because they wanted to know exactly how a "174-MPH Sneeze Blows Off Woman's Hair," or details about the "FBI Captur[ing] Bat Child," or the woman who claimed "I Had Bigfoot's Baby."

We used to think the kind of people who believed tabloid stories were unsophisticated rubes who didn't know any better. It wasn't a big problem. If some goober in Horn Lake believed that Hillary Clinton adopted an alien baby, what was the harm, really? Morons gonna moron. We've come a long way from that sort of lunacy.

Oh wait, no we haven't. Countless numbers of QAnon faithful believe Hillary Clinton and Anderson Cooper (and many others) are involved in a cannibalistic pedophilic sex-slavery ring. I guess for Hillary it probably all started with that alien baby.

It would be funny, except that most Republicans are now basically members of the "Tabloid Party," because what is the QAnon conspiracy if not a gory tabloid fantasy writ large? Let's review: A cabal of cannibalistic satan-worshipping pedophiles (cool band name) — including Democratic politicians, media moguls, and bankers (short-hand for Jews), journalists, and other powerful government figures — control the "deep state" and thereby rule the country. And remember, they eat babies. Let that sink in. Thousands of people believe this shit. Which is terrifying.

The QAnon conspiracy further alleges that a battle between good and evil is raging and that Donald Trump was sent to turn the tide for good. "Q" himself is deep within the deep state, giving cryptic clues to the faithful and orchestrating two great upcoming events: The Storm (mass arrests of the deep state evil-doers) and The Great Awakening, in which all will be revealed and made obvious to non-believers — and Donald Trump will return to his rightful place as president of our great and noble land. (Trump, by the way, is supposed to be sworn in on March 4th. Trump's hotel in Washington, D.C., has tripled its rates for that night. Look it up. Used to be that morons just bought tabloids. Now they book $1,000 hotel rooms.)

This is all insane, right? Surely, most sentient beings can agree on this.

I mean, except for most Republicans in Congress, who gave freshman Congressperson Marjorie Taylor Greene a standing ovation after she slightly backed off a couple of her more controversial QAnon-related remarks. Among her many outrages, Greene has denied 9/11 happened, called several mass shootings "false flag operations" and berated one of the students at Parkland High School as a "coward," claimed Bill and Hillary Clinton were involved in numerous murders, including that of John F. Kennedy Jr., and alleged that Jews in the banking business used lasers from space satellites to start last summer's California forest fires. I could go on, but I'd run out of space. Greene is a walking, talking issue of Weekly World News, only more dangerous. She's racist and vile, and frankly, nuts.

And yet, only 11 Republicans in Congress had the courage to vote for removing Greene from her committee positions last week. Only Liz Cheney had the guts to forcefully speak out against this madness.

And her father's a robot.