Two weeks ago, under the cover of New Orleans' early morning darkness, construction workers wearing flak jackets disassembled the Battle of Liberty Place Monument obelisk, loaded it onto a truck, and hauled it away. A Reconstruction-era relic, the Liberty Monument was built to honor the Battle at Liberty Place, an attempted coup by a group of Confederate insurgents known as the White (Man's) League. The White League rejected the legitimacy of Louisiana's Reconstruction government, murdered municipal police officers, occupied government property for three days, and, ultimately, fought to disenfranchise recently freed black voters. In 1891, the city erected a monument to commemorate the 1874 uprising. White League supporters added an inscription to the monument in 1932, celebrating the coup and the reinstatement of "white supremacy in the South."

The Liberty Monument has faced opposition in recent years. In 1970, Mayor Moon Landrieu erected a plaque acknowledging that the inscription did not accurately represent the politics of modern New Orleans. The inscription was fully covered by 1981, and in 1998, the monument was moved into storage until David Duke filed a lawsuit that forced the city to move it back into public view. After nearly 150 years, the monument has finally been removed for good and will be followed by the deconstruction of other monuments that celebrate the Confederacy and its heroes. 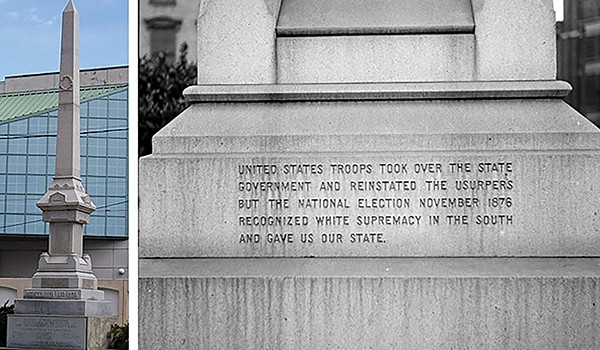 At the removal of the monument, New Orleans Mayor Mitch Landrieu released a statement, saying: "Relocating these Confederate monuments is not about taking something away from someone else. This is not about politics, blame, or retaliation. ... We can remember these divisive chapters in our history in a museum or other facility where they can be put in context — and that's where these statues belong."

Of course, this perfectly reasonable logic sent Confederate fanboys, "Heritage Not Hate" folks, and professional devil's advocates frothing. They lined up to lament our national caving to the liberal/industrial complex and the legions of special snowflakes who would rather not be reminded of a time when their ancestors could be bought and sold from a market. "Think of the history," they cried, their boots firmly planted on land forcibly ripped from its original inhabitants. "Those who can't remember the past are doomed to repeat it" was their rallying cry.

Memphis has had its own monument struggles. In 2015, the Memphis City Council voted to move the remains and commemorative statue of slave trader and Ku Klux Klan Grand Wizard Nathan Bedford Forrest in the months following the massacre of nine black churchgoers at the Emanuel African Methodist Episcopal Church in Charleston, South Carolina. The council's application to relocate the monument was denied by the Tennessee Historical Commission, citing changes to the 2013 Tennessee Heritage Protection Act (THPA). A few months prior to the council's request, the THPA was strengthened by the Tennessee Legislature shortly following the Charleston shooting and the public conversation around the proper placement of Confederate monuments, moving from requiring a majority vote for changes to requiring a two-thirds vote.

"When we start removing these symbols, we take away that history, and they never have the opportunity nor the privilege to know about it," sponsor Representative Steve McDaniel said in 2013.

The "Won't Somebody Please Think of the History?" argument is old and tired, just like the folks who use it. The preservation of these symbols and monuments are about upholding a specific type of historical consciousness, one that reminds their mostly white and mostly male defenders of a time their state-sanctioned power was enough to keep the coloreds in their place. These symbols do nothing to teach further generations about history outside of representing the lengths to which these racist sympathizers will go to cushion their fragile egos and wrongheaded historical narratives. As historical artifacts, these monuments are usually devoid of necessary context, making them little more than a slap in the face to taxpayers who find these symbols representative of their continued oppression.

The history argument is also a lie. People who want to preserve Confederate monuments and symbols don't care about history at all, or else there'd be monuments celebrating all of the groups that truly built this country instead of those who've profited off their bodies and their continued disenfranchisement. But we all know that these monuments don't persist because of any dedication to historical accuracy. They exist because our country is full of racists who need the ghosts of Confederate fighting men to tuck them in at night. The "heritage not hate" argument may be a legitimate feeling for some, but for many others it is used as a shield to project pathological ideas and hateful rhetoric at black citizens. Why else would black Memphians be forced to gaze upon the visage of a man who massacred their ancestors, except to remind them of their place?

With the continued obstruction of the Tennessee Historical Commission and the strident bloviating of Confederate supporters keeping Forrest firmly enshrined in an area undergoing futuristic renovations, you have to wonder what is really keeping these people stuck in the past. Is it a fear of progress, or is it simple hatred?

Troy L. Wiggins is a Memphis writer whose work has appeared in the Memphis Noir anthology, Make Memphis magazine, and The Memphis Flyer.