The Wolf River Conservancy Preserves Our Water, Wildlife, and Woods 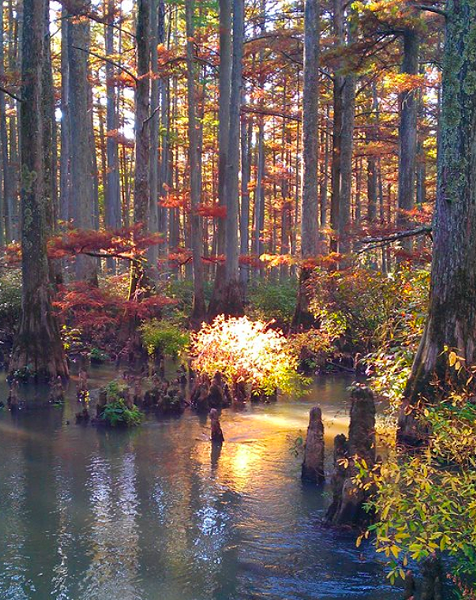 You may be wondering how protecting land along the Wolf River benefits you, the public? The answer in short is threefold: water, wildlife, and woods.

To expand upon the trifecta, let's review maybe the most important reason for protecting land in the Mid-South: water. Along the Wolf River, wetlands are the lifeblood of the watershed. Not only do they provide habitat for many critters and rare plants, but they also help purify our water. Wetlands hold onto water that allows pollutants to fall out before flowing into the Wolf or tributary streams. Effectively, wetlands act as a natural first line of defense for water quality. In east Shelby and all of Fayette County, Wolf River wetlands also recharge the Memphis Sand Aquifer. The aquifer is very close to the surface of the earth in Fayette County, and Wolf River wetlands are very low-lying. Thus (thanks to research done by University of Memphis), we know that Wolf River wetlands recharge the Memphis Sand Aquifer. Our very first project (the 1985 gravel mine we stopped) had aquifer recharge implications. The Wolf River Conservancy has been helping to protect land and the Memphis Sand Aquifer since 1985.

Wolf River Conservancy is certainly not alone in protecting land, the aquifer, and surface water. While the Conservancy is effective at wetlands conservation for aquifer recharge, two amazing groups are positively affecting the amount of water we withdraw from the aquifer. The outstanding work that Protect Our Aquifer and the Sierra Club have done for years is vital for prevention of aquifer contamination and advocating for smart use of the aquifer. These groups helped advocate for University of Memphis to obtain a million dollars per year of research money to study aquifer recharge in the city of Memphis. Most recently, we all tag-teamed with Berclair and Nutbush neighbors to stop a proposed landfill and sand and gravel mine in wetlands and the floodplain of the Wolf River.

Other positive side effects of land conservation are the sustainable recreational and educational opportunities it creates. Through land conservation, bottomland hardwood forests (woods) will thrive unthreatened from development or mining. This habitat type greatly affects wildlife populations, and its conservation creates a more resilient Wolf River corridor. The resulting conserved landscape creates thousands of acres of high-quality habitat and diverse wildlife for recreation and endless opportunities for education.

Wolf River Conservancy and many other organizations are bolstering outdoor environmental education by partnering with schools and utilizing protected lands as a location to teach. The protected wildlife and habitat provide hands-on experiences for students to see and touch what they read about in textbooks. The Conservancy's volunteer river guides also teach and expose kids and adults to paddling in a serene natural setting.

In addition to conserving land, Wolf River Conservancy is partnering with the city of Memphis and Shelby County to build the Wolf River Greenway. The Greenway is a paved trail following the meanders of the Wolf River from Mud Island to Germantown. The Wolf River Greenway, once completed, will link together protected lands as an 850-acre linear park — an area larger than Central Park in New York. The public will gain access to more parts of the city via nonmotorized recreation for picnics, education, paddling, mountain biking, and more. Sensitive wetlands and habitats have been protected via the Wolf River Greenway project, which is funded half from private donations and half from government.

The founding members had a vision of the Wolf River as a future Greenway and wildlife corridor through the city of Memphis, and we are fortunate to be able to enact the vision. We invite the public to our next Greenway Grand Opening on Saturday, April 27, at 9 a.m. at 2630 Epping Way in the Raleigh neighborhood.

Keith Cole is executive director of the Wolf River Conservancy.