The World Cup of Beer at Celtic Crossing

We were sitting on the patio of the Celtic Crossing in Cooper-Young watching the second game of the FIFA World Cup, when Portugal's Cristiano Ronaldo pulled a hat trick, tying a much-favored Spain. The two tables next to us exploded with the cheers of a dozen Portuguese Elvis fans in Memphis for a bachelor party. Which isn't something you see every day.

Every couple of years during the Olympics, we suddenly get interested in sports like gymnastics or curling, so why not jump head-first into soccer every four years? The U.S. didn't make it to the World Cup, but that's no reason not to get involved, especially now that we're in the high-stakes knockout round that Americans actually understand. Or when DJ's hosting the party. 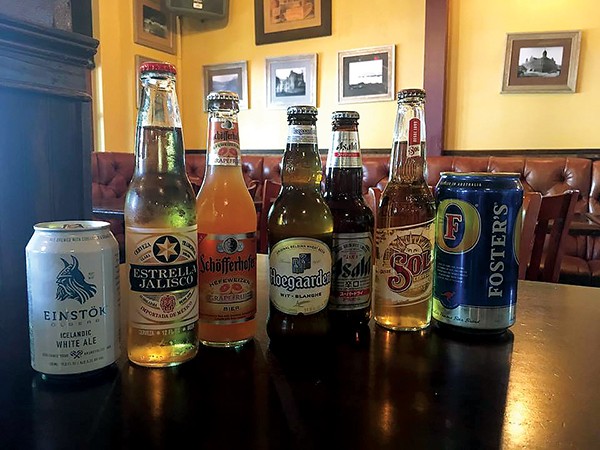 DJ Naylor, owner of the Celtic Crossing, opens the bar for every game — every single one. When I showed up at 5 a.m. for France vs. Australia, the doors were open, about 10 fans were there, and coffee was on. So was the "World Cup of Beer" — a bucket featuring beers from the World Cup countries: Carlsberg from Denmark, Estrella from Spain, Asahi from Japan, Hoegaarden from Belgium, and Einstock White Ale from upstart Iceland. Also available in the bucket is Sol from Mexico, which pulled off an amazing upset of the German producers of Schöfferhofer. While a few of these teams are no longer in the tournament, their beers are still available for a little buzzed geo-political diplomacy.

These are all sports fan beers, drinkable lagers, except Einstock — a light ale. In Schöfferhoffer — which looks like an orange Fanta in the bottle — the Germans aren't playing to type, but this was a weird year for them. It's made with grapefruit, and given how picky the Germans are about beer production, it's real grapefruit and not flavoring. It's basically a shandy. Yes, I know, some of us need to tread carefully when ordering a beer that looks like Tang, but in the sticky heat this thing is really refreshing.

Celtic Crossing's World Cup food menu is more a homage to the tournament hosts, Russia. While DJ knows Irish food, he said he had to call some Russians working for FedEx for help with the menu, which included Smoked Salmon Blini, a sort of pancake topped with smoked salmon and sour cream; Crepes, another sort of thinner pancake filled with minced beef, onions and mushrooms; and Butterbrot, a buttered marble rye topped with ham and egg salad.

By about 8:30 a.m., there is less coffee and more beer. The place was filled with 100 or so people, not crowded but full, and not the sort of crowd that normally eats breakfast in a bar. All were focused on the game, cheering full-bore. And this lasts throughout the day. Go for the beer, go for the food, go for the social experiment of watching Americans watch the World Cup.

Even when our men's team does make the tournament, we tend to get knocked out by some third world powerhouse like Ghana. The U.S. Women's team, it should be pointed out, is a global contender that will actually win the World Cup on occasion. So this is as good a time as any for us to embrace our immigrant roots and cheer for the place from which we originally came. And that's the beautiful thing about a good beer and sports: No one minded my hollering "Laissez le bon temps rouler" at a French goal. And I promise you that I was the only one in the place rooting for France. I'll root for England for the enchanting Mrs. M, and Serbia in honor of some surgeons from Belgrade who completely outdrank me one night in the Ukraine. Good people.

Grab a beer, embrace a team you know nothing about, have a blini. In the words of DJ, your Irish-born, soccer fanatic host, "I think soccer could ease a lot of the world's problems."