The Year of Magical Thinking

My girlfriend Sydnie and I have a tradition, picked up from a time one of my bands played an unpaid gig at a New Year's Eve party half a decade or so ago. In a scene that's increasingly hard to imagine now, roughly 10 months into this pandemic, the band and partygoers crammed into local filmmaker/illustrator/personality Mike McCarthy's attic amid low-budget movie props and spinner racks of underground comic books, for the entirety of the mercifully short set. We were so close to each other and not a mask in sight! Those were the days.

After the set, McCarthy bade everyone grab a suitcase — or guitar case — for a countdown-to-midnight promenade around the block. Our host claimed that the walk was a New Orleans tradition that guaranteed prosperity in the coming year. Since it was so weird and whimsical — and since I made a little more money playing music the next year — I decided the tradition was both charming and effective, and I made up my mind to adopt it. So, every New Year's Eve just before midnight, Sydnie and I grab suitcases and champagne and jog around the block listening to fireworks and car horns. 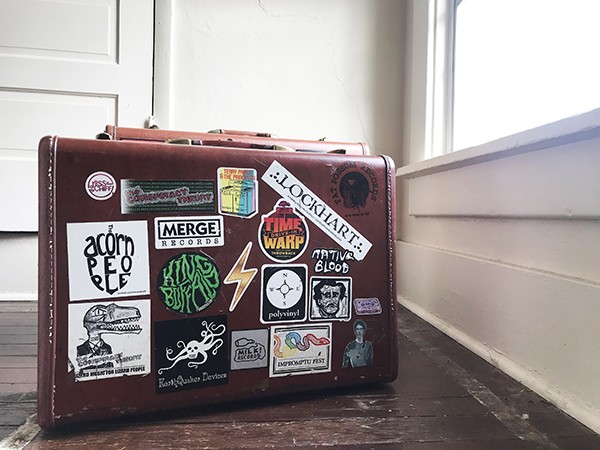 Syd was in Idaho visiting family. Though I had been on the first leg of the trip with her, I hopped on a flight back to Memphis right after Christmas, so we made do with a midnight phone call. "So we skip a year. What's the worst that can happen," I probably thought to myself, "a global pandemic and the emergence of latent autocratic sentiment in the Republican Party? Gimme a break!" Now, I'm not taking credit for all of 2020, but Syd and I made damn sure we walked around the block this year. But did you? Did you wear your lucky underpants? Did we all eat enough black-eyed peas and collard greens to turn this thing around?

It sounds pretty crazy when typed out in black and white, which is how I've felt for most of the past nine or 10 months, as people, whether ironically or honestly, shook their fists and cursed 2020. I'm pretty sure 2020 didn't close rural hospitals or sow anti-science sentiments in Tennessee. Though it's not the year, I do think many of the travesties of 2020 have a common root. Namely, that we don't want to face facts. In fact, there's an alternate fact for every scenario! Australia and California were aflame, not because of climate change, but thanks to improper sweeping of the forest floors. Black Lives Matter protesters weren't exercising their constitutional right to protest to demand fair treatment from law enforcement, they were anarchists agitating to bring down the state. Maybe 352,000 Americans have died because of COVID, or maybe it's a Democratic plot to tarnish Trump's spotless record. And, boy howdy, without Democratic interference and baseless witch hunts, nothing could have brought down our Fearless Leader!

This choose-your-own-adventure approach to history has gotten out of hand, and we in Tennessee are among the worst offenders in a nation of conspiracy theorists. It's why our COVID numbers are so high, why our leaders don't feel they have to do much of anything to protect or serve us. Governor Bill Lee can wash his hands and sidestep any responsibility for combating the coronavirus as long as his office keeps sending out emails about how hard he's praying. Senator Marsha Blackburn and incoming Senator Bill Hagerty can vote against our basic economic needs as long as they steadfastly refuse to accept the reality that President Trump lost the election more than two months ago, instead, persisting with baseless claims of election fraud.

I had hoped 2021 would be the year when I would write a little less about disinformation and conspiracy theories in this space. I even had a downright hopeful column about overcoming distance written and ready to go. But that was before a suicide bomber blew up an RV and parts of downtown Nashville near the AT&T building, apparently because he believed conspiracies about 5G internet. That was before The Washington Post released an audio file of the president of the United States pressuring Georgia's secretary of state to "find" votes, like a scene out of the cheapest, clumsiest Goodfellas knockoff.

We can't just tally and retally votes until we achieve a result we like. Neither can we contain a disease by ignoring it, or put off combating climate change until it's convenient for shareholders. Some things can't be spun.

Will 2021 be yet another year of magical thinking, of hanging our hopes on black-eyed peas and New Year's traditions and conspiracy theories? Or will we finally, mercifully, admit that many of our problems are of our own making — and, thus, within our ability to change?

Jesse Davis is the Flyer copy editor and book editor.