Like the classic drama's pivotal character, Brick Pollitt, a frustrated alcoholic who lost the one great, good, true thing in his life and now spends his days drinking till he feels peace, Theatre Memphis' revival of Cat on a Hot Tin Roof is a handsome, aging wreck still waiting for "the click."

Tennessee Williams' Pulitzer Prize-winning script is 62 years old, but there's still plenty of life left in its gleefully profane old body. Time may have been kinder to The Glass Menagerie, but Cat has aged well enough. It's still a potent meditation on family, legacy, mortality, and the terrible lies we tell ourselves to keep on living. The play's most famous character, Maggie the Cat, Brick's manipulative, Nashville-trash wife, is as fascinating as she ever was, and Natalie Jones gives the character plenty of genuine Ole Miss je ne sais quoi. The cast is beautiful. The design is nifty. But opening night at Theatre Memphis was plagued by slow cues and sputtered lines that made the show crawl like cold molasses.

Williams' nods to King Lear aren't subtle. The author's own ambitions are also fairly evident. He wants this play to come on like a devastating force of nature and leave audiences feeling like they've weathered a thunderstorm of Biblical proportions. To that end, director Anita "Jo" Lenhart's production is too cool, too formal, and far too rigid. It's too many perfect lines, cut on the bias, against the grain of a play that that coos and whispers, before it roils, then boils, and, per the play's famous Dylan Thomas epigraph, rages against the dying of the light.

Cat's top-shelf cast of actors walk those rigidly proscribed lines like everybody knows where they're supposed to go, but nobody's entirely sure why they're going there. Words and ideas get lost in business, and those that aren't lost are projected, in an actorly manner occasionally resembling human speech. 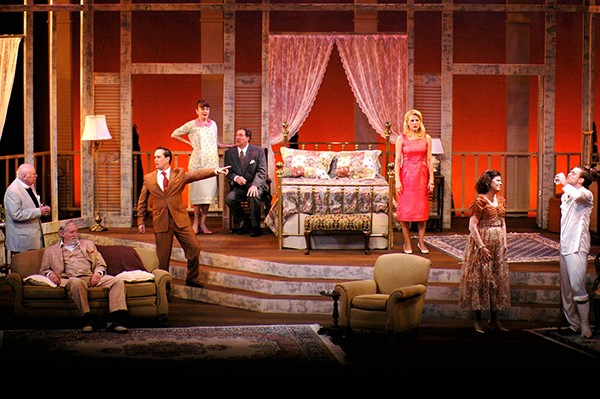 Williams built Cat like a piece of music, weaving distant conversations over croquet, phone calls from neighboring rooms, the sounds of children shrieking and tearing about the grounds, fireworks, and a wild storm, with aria-like monologues and explosive confrontations. The story of brothers competing for a birthright conjures Biblical images of Jacob and Esau and Christ's parable of the prodigal son. The characters may be petty, but there are no small themes here. Cat wants to be epic at every turn.

Speaking of epic, Bill Baker is a heroic force for good in Memphis theater. His personal work is experimental and essential, but rare forays into more traditional drama are also reliably satisfying. For reasons difficult to identify, Baker's struggling in the role of Big Daddy and only occasionally connects with the coarse "Mississippi Redneck" who made a fortune, and, unaware of his positive cancer diagnosis, is planning to spend his twilight years in an extravagant sexual escapade. Key lines of dialogue just weren't there when he needed them.

Few things are harder for an actor than playing a character who only wants to disappear. Presumed homosexual Brick Pollitt is one of the most sadistically sullen, inward-focusing characters ever imagined for the stage, and, like so many actors before him, the usually excellent Gabe Beutel-Gunn fights to stay in scenes and on task. Jones is more successful, as Maggie, who's eaten up with longing but willing to do whatever it takes to avoid being old without money. As is the case with everybody else, Jones' blocking feels choreographed, and her long, jazzy speeches could stand a lot more clarity and color. Kinon Keplinger and Shannon Walton are pure competence as the family's chief breeders, Brother Man and Sister Woman. Their brief but memorable appearance, in supporting roles, are the night's most fully realized performances.

Lenhart has assembled such an incredibly strong, smart cast it's impossible to imagine this Cat won't land on its feet when the performances settle. The click, however, requires confidence. And nothing expresses doubt like a pre-show curtain speech assuring audiences that, in spite of whatever they may think, a main character is indeed using his crutch appropriately, "according to extensive research." Y'all, please.