"I skate. I don't do it out there," says Mark Horrocks, pointing to a massive open space filled with ramps of various heights and an intimidating halfpipe.

Horrocks considers himself more of a long boarder and snowboarder. He is co-owner of Society Skatepark & Coffee, along with Matthew Wrage. The park is in the Binghampton neighborhood and opened last fall. It took some doing. The ramps were once the property of the recently closed Hazard County Skatepark in Atlanta. The Society crew headed there and dismantled the park. It took six semi trucks to get it back to Memphis.

Society is the only private indoor park in this area, which means, says Horrocks, that folks can "go year-round, rain or shine, day or night." 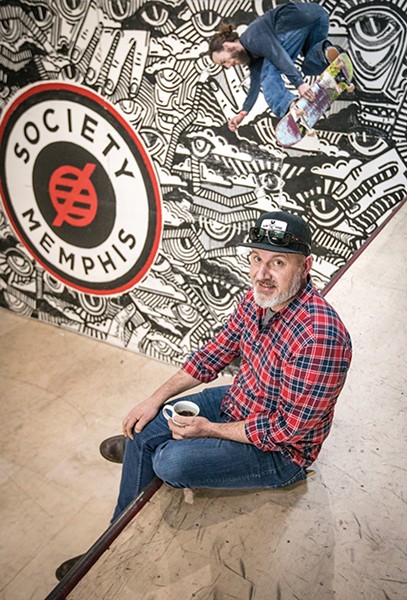 The park is ideal for parents who want their kids in a safe environment, while they can be inside in air conditioning and read or work on their computers and have a cup of coffee.

About that coffee — they offer Dr. Bean's cold brew and assorted coffee drinks made with Vice & Virtue. They plan to highlight Memphis-roasted coffees and introduce some out-of-town brands as well. Inside a case is an eye-widening array of treats — huge brownies, rice krispies treats, and chocolate chip cookies, about which Horrocks says, "People have told us it's the best chocolate chip cookie ever." Everything is made in-house.

They also offer cold drinks and a few grab-and-go items, such as pasta salad from Franco's Italian Kitchen. They plan to expand the grab-and-go menu soon with sandwiches and salads. 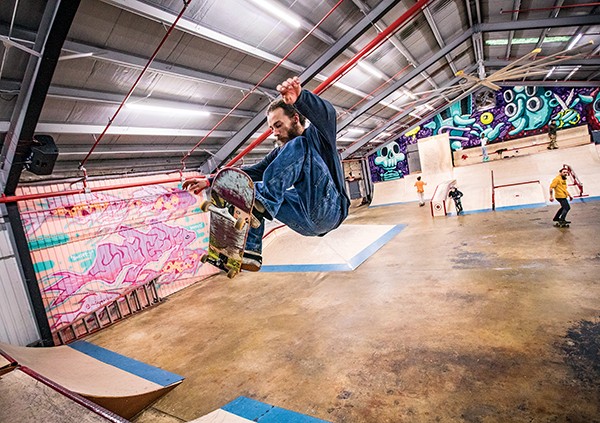 One corner of the front half of Society is devoted to Contact Skateboard Shop, which is run by Zac and Heather Roberts.

Contact offers everything a skater could need or want. Customers can custom-build their skateboards. There are decks from 5boro and Alien Workshop, wheels from Super Juice, and trucks from Ace. Many of the items are exclusive to the store.

Of course, you have to look the part. (How much of skating is style? "Everything," Roberts says. "That's all there is. It's wild.") They've got your New Balance and Lakai skate shoes, your Dickies Flex pants, and various branded T-shirts and hoodies.

Society offers lessons for the kids every Saturday for the wee beginners to the more advanced shredders. Horrocks says sometimes the girls outnumber the boys. There are also classes for adults on Monday nights.

At some point, Society plans to hold concerts and bring in pros for demos as well as hold competitions. In the spaces with the ramps, there is art by Birdcap, and a really stark and cool mural by Frances Berry surrounds the halfpipe.

At one point, Horrocks recalls asking himself, "Is this a good thing to do?" These days, he's feeling pretty optimistic.

A few years ago, Ephie Johnson threatened her sons Andre and Jonathan that she was going to open a shop and have them work in it. They didn't believe her. She opened her first Pop-a-roos on North Parkway Downtown in 2014.

The second Pop-a-roos opened in the Crosstown Concourse a few weeks ago.

The thinking behind Pop-a-roos was that she likes popcorn. Johnson's dad was her inspiration. "My dad made all kinds of popcorn, fun different flavors," she says, recalling that her dad made use of such ingredients as Smucker's syrup.

It was Johnson's mother who really fostered her creativity. Johnson says that her mother can make anything taste good, and when her mother compliments her popcorn or asks her to bring her some, it's the ultimate seal of approval.

Among the more popular popcorns are the Chicago (caramel and cheddar) and River Mix (peanut butter, caramel, and cheese).

"I'm not going to tell you that much," Johnson says when asked about her approach to making her popcorns. And she doesn't.

Johnson also runs the Neighborhood Christian Centers, which offers assistance to those in need. Some of the Centers' clients work for Pop-a-roos. "It's popcorn with a purpose," she says.

Among the offerings at Pop-a-roos are hot dogs and koolickles (pickles made with Kool-Aid). The purple koolickle is grape flavored and the red is well ... "Red flavor can be whatever flavor is red," Johnson says.

Painted on one wall of the new space in the Concourse is "It's on and poppin." Feels like a pretty apt motto for Johnson.

"I'm a black woman out here trying to make it happen," she says.