Three from the GOP

Mark White is one of those steadfast, reliable, and deserving types it's easy to bond with and without whom American politics probably couldn't function. After doing yeoman work in others' campaigns and as chair of various Republican Party events, White is making his second try for public office.

He lost to one of the party's rising stars, Brian Kelsey, in a multi-candidate primary for state representative two years ago, but instead of hunkering down and trimming his sails, he decided to go for bigger game this year and is probably the favorite in the August 3rd Republican primary field. As a vice-chair of the Shelby County Republican Party, White certainly will have the lion's share of support from GOP regulars and the party's established donors.

The owner of a business that arranges parties and other events, White is also chairman of the local chapter of the National Federation of Independent Businesses, where his event-planning skills come in handy.

White's current campaign is arguably both hampered and helped by his modest, low-key personality -- which, in any case, should wear well if he found himself in office. His chances of getting there are better than they might ordinarily be in this historically Democratic district because of the independent candidacy of Jake Ford. Provided he gets by the rest of the Republican field, White has some reason to hope that a three-way race could divide along political lines rather than racial ones.

One obstacle to White's primary chances is Tom Guleff, an engaging and thoroughly original personality who has spent the last several weeks running a campaign almost exclusively by e-mail -- and gag e-mails at that, most of them satirizing the return to Memphis of one possible Democratic opponent, Joe Ford Jr. The e-mails purport to offer the California entertainment lawyer guided tours of the (presumably unfamiliar) 9th Congressional District. Some e-mails have also poked fun at Jake Ford.

Guleff's maverick wit has been expended in more general directions as well. Back when various politicians were rushing off to the Mexican border to stage photo ops and other public professions of concern regarding the hot-button immigration issue, Guleff dashed off an e-mail from the Mississippi border, where he purported to be studying first-hand the out-migration from Shelby County due to local crime problems and educational deficiencies.

There is method to his madness, in other words -- and some hint of a serious personality behind it all. A West Point graduate whose resume lists a Bronze Star won during service in the first Gulf War, Guleff founded a company that produces sports-training videos and works also as a consultant in employee development. Emphasizing simple themes of family values, individual liberty, and limited government, Guleff has eschewed fund-raising per se and depends on cyberspace (besides his e-mails, he has a Web site, complete with a blog) and personal appearances to get his message across.

For obvious reasons, he's a long shot, but Guleff has made a lot of people sit up and take notice.

At most of the public forums for 9th District congressional candidates, one candidate has stood out for not standing out. This is Derrick Bennett, former chief accountant for Shelby County government and current comptroller for Crichton College. A Gulf War veteran like Guleff, Bennett is a member of Bellevue Baptist Church, a currently Cordova-based congregation which, much more so than most predominantly white churches, is known for its political consciousness and involvement.

That tilt -- which is the conservative side of most issues, social and economic -- owes much to the active involvement in political controversies of its late, legendary pastor, Dr. Adrian Rogers. Rogers, a former president of the Southern Baptist Convention, was a pivotal figure in his denomination's purging of social moderates from positions of influence, and his political allegiances were best indicated by the eulogistic ceremony he convened at the church after the death of former President Ronald Reagan.

That's the political matrix for Bennett; the chief difference between him and most other public exponents of it is his race. He's an African American, and his amiable, conciliatory presence, which makes him a good test case for the GOP's "outreach" efforts, allowed him to fit in smoothly with the socially conservative ambience of the several forums sponsored by the Black Ministerial Association. Nor have his positions, favoring education and mentoring approaches to problems, been out of sync with the rhetoric of the contest. But he remains a long shot.

The next installment will conclude our series of 9th District candidate profiles. 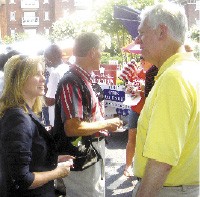 Although the busy, highly contested race for the open 9th District congressional seat has attracted most attention locally, another race -- that for Tennessee's 7th District, which runs from suburban Memphis to suburban Nashville -- could generate some heat. Indeed, it already has.

Incumbent Republican Marsha Blackburn of Brentwood, unopposed in her primary, is heavily favored. A ranking member of the Republican House leadership in only her second term, Blackburn anchors herself in her party's most conservative wing and is probably, in the cliché phrase that indicates political weight these days, the 800-pound gorilla in state Republican circles. That's a metaphor of some irony, though, considering that the relatively petite Blackburn, who possesses a model's good looks and a flowing blond coif to match, just won a national political Web site's online contest to decide "the hottest woman in U.S. politics."

There is no doubting that the three Republicans now fighting it out for their party's U.S. Senate nomination -- Bob Corker, Ed Bryant, and Van Hilleary -- were relieved that Blackburn opted to stay in her House seat this time around. The last time she took part in a multi-candidate Republican primary -- in 2002, when she won her current seat -- she pulled in an absolute majority over a field that included several redoubtable candidates. Even those who consider her politics far right acknowledge her industry, as officeholder and as campaigner.

Blackburn was talking a little politics during an appearance Sunday at the annual Fourth of July picnic at the St. Peter complex at Poplar and McLean, a traditional venue for politicians and one that fairly swarmed with hopefuls in this heavy-ballot election year. Having just returned from her fourth trip to Iraq, Blackburn said she remains optimistic about the military and political outcome there and said gradual reductions in the American troop force are likely and "have been in the plan all along."

Her response was somewhat less sunny, though, when told of remarks made Saturday by one of her prospective Democratic opponents, Bill Morrison of Bartlett, who teaches social studies at Southwind Middle School. Addressing a group of Germantown Democrats at the Pickering Community Center, Morrison excited his listeners with some old-fashioned verbal pyrotechnics, among other things slamming the incumbent as a secret enemy of Social Security.

But what really caught Blackburn up short on Sunday was Morrison's claim that, when the two met at a recent event in Middle Tennessee, Blackburn had leaned in close and said, "I'm going to bury you!" To which, in his account, he replied, "Just be sure to get out of my office in November." That made good theater for the Democrats at Pickering, most of whom are of the Yellow Dog variety, tired of what they consider lackluster "me too" campaigns by party candidates. But Blackburn pronounced it pure fiction.

"That's absurd!" she said. "He introduced himself, and all I said back was 'Nice to meet you.'"

Whatever the case, the next meeting the two have is likely to be somewhat strained.

To be able to take on Blackburn, however, Morrison will first have to beat a primary opponent, Randy Morris of Waynesboro, who appeared, along with Morrison, at a forum last week in Cordova. And whoever becomes the Democratic nominee will start way behind both financially and in the polls. And cosmetically, too, of course. But the stocky, balding Morrison, who limps as the result of a motor-vehicle accident he barely survived, promises to try to make things as ugly as he can for the incumbent.

Want to respond? Send us an email here.