Time to Trickle Up

Revitalizing the middle-class won't happen if we keep doing the same thing while expecting a different result. 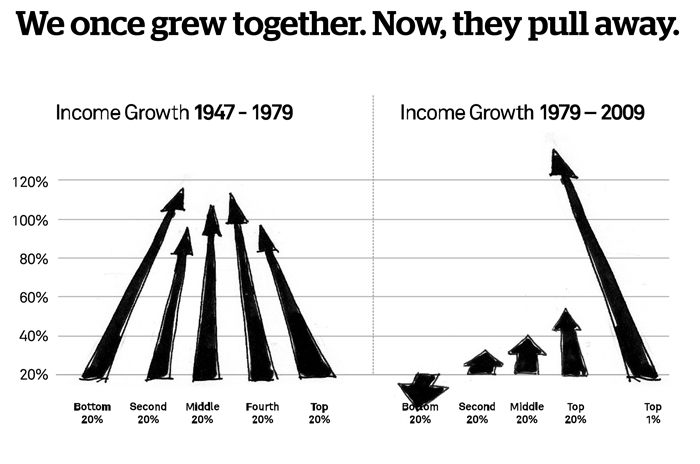 Despite decades of evidence that it doesn't work, Republicans are still advocating for a trickle-down economy. You know their thinking: If we just get out of the way and let the magic job-creators do their sweet capitalism, unimpaired by all those government regulations and taxes, the money will flow down to the middle class like tips to Mitt Romney's pool boy.

The latest manifestation came last week, when Oklahoma Governor Mary Fallin signed a bill prohibiting cities across that state from establishing mandatory minimum wage and employee benefits, including vacation or sick leave days. Oklahoma City was trying to pass an ordinance raising the minimum wage from $7.25 to $10.10. Nope. Not going to happen, said GOP legislators. They contended that efforts to increase the minimum wage could potentially harm local business communities. So much for small government.

Tennessee, of course, is ahead of the curve on this road to nowhere, having passed similar legislation last year. Meanwhile, the income inequality gap just keeps getting bigger and the middle-class keeps shrinking. According to a recent report by the Congressional Budget Office, raising the minimum wage from its current level of $7.25 to $10.10 would boost collective earnings by $31 billion for 33 million low-wage workers and lift an estimated 900,000 people out of poverty.

And what do you think those low-wage people will do with that extra $31 billion? They won't be funneling it into off-shore investments. They won't be stashing it in Swiss bank accounts or taking European vacations. They will spend it — on food, housing, appliances, maybe even a car. Many of them will move from subsistence living with government benefits to being able to enter the economy and inject it with fresh revenue. That means more money in circulation, money that will flow to businesses in need of customers. Call it "trickle up."

A healthy, vibrant middle class has always been the cornerstone of the American economy. We've tried letting the rich get richer and waiting for it trickle down, and it hasn't worked — except for the rich, who have indeed gotten much richer over the past three decades.

Now that the early presidential sweepstakes are heating up, the Republicans, even Romney, are making noises about fixing the income inequality problem. John Boehner and Mitch McConnell were on CBS' 60 Minutes last weekend, saying they were all for improving the plight of the middle class — as long as we don't, you know, actually raise the minimum wage. Or do anything other than continuing to sing the praises of a trickle-down economy.

The middle class is getting trickled-down on, all right. But it's not with money.