Time-Warp Drive Returns with the Films of Stanley Kubrick

Screenings of The Shining, A Clockwork Orange, Dr. Strangelove, or: How I Learned To Stop Worrying and Love the Bomb, and 2001: A Space Odyssey

The July edition of the Time Warp Drive-In is devoted to a director whose work is more often associated with the art house than the drive-in. On the occasion of what would have been Stanley Kubrick's 86th birthday, Malco's Summer Drive-In will host an all-night marathon of the director's work. Memphis filmmaker Mike McCarthy, who, along with Black Lodge Video's Matthew Martin, programs the monthly events, says that Kubrick's influence stretched far beyond film.

"Kubrick created worlds," McCarthy says. "A hippie, like David Bowie, could enter the theater, inhabit the world of 2001: A Space Odyssey, and exit as something else." The character of David Bowman, the astronaut who ends 2001: A Space Odyssey "lost in space," inspired Bowie's first hit, "Space Oddity." Kubrick's next film, 1971's A Clockwork Orange, would similarly inspire the look of Glam rock and the attitude of punk rock.

The evening of films will begin with what is probably Kubrick's most popular work, 1980's The Shining, a masterful adaptation of Stephen King's novel. With Kubrick, who started out as a photographer for Look magazine in 1946, the richness of his images conveys the richness of his ideas. A common criticism of Kubrick's style is that the performances are flat or cold. But that is a misreading of what the director was trying to do, for it is not the actors who are emoting, but the man behind the camera. The Shining, while filled with luscious images, is an exception. In Jack Nicholson, Kubrick met his artistic match, much as he had 20 years earlier when he did Paths Of Glory and Spartacus with Kirk Douglas. 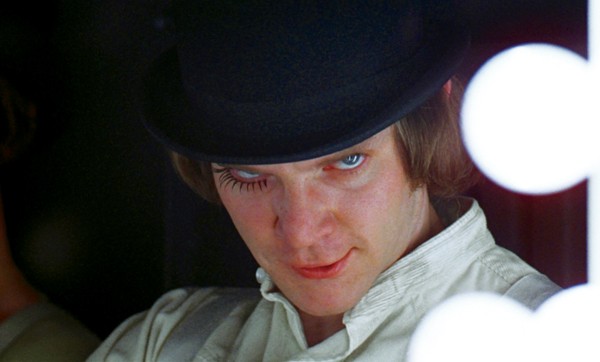 The evening continues with another literary adaptation, A Clockwork Orange. Anthony Burgess spoke more favorably of the film than King does of The Shining, but Kubrick made both texts jumping off points for his meticulous, arresting imagery. The near-future dystopia is dominated by Malcolm McDowell as Alex, a middle-class street thug obsessed with classical music whose path to redemption is almost as ethically queasy as his ritualistic ultraviolence.

Even though A Clockwork Orange was initially rated X for violence, its body count pales next to Kubrick's masterpiece Dr. Strangelove, or: How I Learned To Stop Worrying and Love the Bomb. In 1961, Kubrick set out to make a serious movie about the dangers of nuclear war. But the more he read about the Cold War doctrine of "Mutually Assured Destruction," the more absurd it seemed. So Kubrick made the radical decision to turn his film into a comedy by bringing onboard writer Terry Southern and comedic super-genius Peter Sellers. Even taken apart from its Cold War context, Dr. Strangelove is a clear triumph and still one of the most important comedies ever made. That the civilization-ending mass killing is, in retrospect, somehow more acceptable than Alex's mundane street thuggery is just part of the joke.

The last film on the drive-in program is Kubrick's biggest and most intimidating masterpiece. 2001: A Space Odyssey is not only the greatest science fiction movie ever made, it placed second behind only Ozu's Tokyo Story in the 2012 Sight & Sound Directors' poll of the greatest films ever. Every shot is a meticulous work of art in its own right, and taken together, they offer too much to comprehend in one sitting. But the pleasure of returning to unravel works of genius is part of what gives Kubrick's films their enduring power.