Tis the Season for Memphis Politics

Amid the holiday festivities the two political parties were gathering steam for 2016. 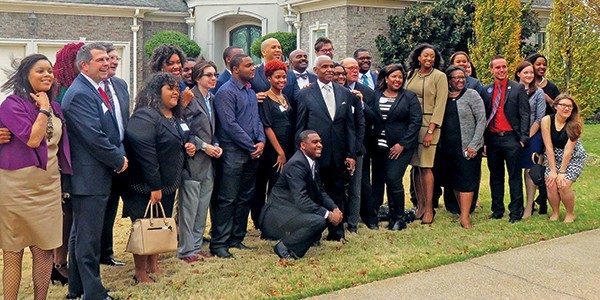 Yes, Virginia, there is a Santa Claus — if you happen to be a political junkie. Those whose appetite for the electoral process was not sated by the close of the Memphis run-off races on November 19th have a freshly wrapped gift under the tree — the prospect of fresh voting March 1st, "Super Tuesday," for which a preliminary deadline of sorts passed during the week.

Last Thursday, December 10th, was the filing deadline for the 2016 General Sessions Clerk's race, the party primaries which will take place on Super Tuesday, along with presidential primaries for both parties.

The deadline came off as something of a stealth event — save for those individuals directly involved in the outcomes or a relatively few activists in the two local political parties or the really zealous members of Shelby County's aforementioned political-junkie class.

But, whether or not many people were paying attention or even thinking about it, at the stroke of noon on Thursday, December 10th, the curtain did indeed fall at the Election Commission on applications for the General Sessions clerkship, which is now held by Ed Stanton Jr., who is not to be confused with his son, Ed Stanton III, who is U.S. Attorney for the Western District of Tennessee.

(The younger Stanton is involved in a stealth situation of sorts, too. He was appointed last April by President Obama to be a U.S. District Judge at the urging of 9th District congressman Steve Cohen, a Democrat, has been backed for the appointment by U.S. Senators Lamar Alexander and Bob Corker, both Republicans, and easily sailed through a Senate Judiciary Committee hearing in October. But his final confirmation vote by the full Senate, along with those of many other judicial nominees, has been snarled in a delay that stems from the continuing partisan gridlock in Congress.)

Stanton Jr. is regarded as a heavy favorite to be re-elected as clerk, though at the filing deadline he had drawn two Democratic primary opponents, Del Gill and William Stovall; one Republican challenger, Richard Morton, and one independent opponent, William Chism.

Stanton is one of two Democratic incumbents who have successfully withstood challenges from Republican candidates in recent years. The other is Shelby County Assessor Cheyenne Johnson. Both were reelected four years ago, in part of an off-year cycle for county officials.

After that 2012 election, the office of assessor was rescheduled in sync with the general slate of county officials, and she was forced to run again in 2014, winning that race handily and leaving Stanton's position as the only county office scheduled in a different four-year cycle. He will vie for the Democratic nomination with Gill and Stovall on the aforesaid "Super Tuesday."

August 4th is also the date for party primaries for state legislative races.

Confused? Don't worry. We'll keep reminding you as each case comes in its turn.

• It's a fair bet that most political activists have focused more attention lately on the string of seasonal holiday parties that various Democratic and Republican groups have been holding.

Though they certainly play a role in binding the local organizations together, and several double as party fund-raisers, these gatherings, like holiday parties of all kinds, are more about good cheer and a break from routine, or, as was the case with the party held over the weekend by the Democratic Women of Shelby County, the expression of a special tribute to longtime party activist Myra Stiles, whose household has been the traditional home base for the DWSC's annual holiday affairs.

The event also enticed a significant turnout from local Democrats — a proverbial who's who, including Cohen and outgoing Memphis Mayor A C Wharton, a late arrival who got an especially warm welcome. Suggested donation amounts ranged from $2,500 for PACs (Political Action Committees) to $1,000 for party finance council members to $250 for individuals. House Democratic Caucus chair Mike Stewart of Nashville set a goal of $20,000 for the event, and that fairly modest threshold would seem to have been easily met and exceeded.

Booker is one of the Democratic Party's ascending stars on the national scene. Well aware of the current low ebb of Democratic fortunes in Tennessee, at least numerically, he reminded attendees of the event that he, too, had tasted defeat in his mayoral race in Newark, before finally winning in a second try and beginning his rise.

And he cautioned his audience against fatalism, contending that Democrats continued to prove they had the numbers to win in presidential races and that overcoming low turnout in non-presidential races was the key to an overall political revival.

Presidential politics was a subject much under discussion at Republican holiday events. Typical was the annual Christmas party of the East Shelby Republican Club at the Pickering Community Center in Germantown, Monday night. To judge by the comments volunteered in conversation, celebrity candidate Donald Trump still is riding high, though support was also evident for other candidates, notably Texas Senator Ted Cruz and Florida Senator Marco Rubio.

• Before the week is out, Mayor-elect Jim Strickland may — and no doubt will — get off a few more striking acts in his run-up to the New Year's oath-taking, but, to those of us in the news business, nothing could have been more startling than his back-to-back selection of Ursula Madden and Kyle Veazey as major assistants  in his administration-to-be.

It was eye-opening enough last week when Strickland announced the appointment of Madden, longtime news anchor for major local television outlet, WMC-TV, Action News 5. To follow that up with this week's announcement of a Veazey appointment is downright staggering.

Does the new mayor intend to launch a state-of-the-art news operation as an adjunct to city government? In the couple of years he has served as lead of the politics-and-government reporting team for The Commercial Appeal, Veazey not only resurrected that paper's cachet as a leading source of political news, he elevated the public's sense of urgency about public news in general.

A former sportswriter, he brought a statistician's zeal and a fan's passion to the business of covering politics. And for the rest of us in the field, he made it fun to compete, and that's a word — "compete" — that he gave new meaning to.

Trying to keep up with Veazey in one sense was a lost cause: He had too much energy, too much commitment, and, to be honest, too much of an advantage in exposure to try to out-do. But he also enlarged the scope of the game itself. It wasn't a zero-sum matter of win-lose. No knee-capping. No screw your buddy. In a way, it was like being in an orchestra. You still had ample play for your own instrument, and it was impossible not to admire the way he handled his.

Now, just what the hell is he going to do in city government that will top that act?