Tomato Sauced: Beyond the Bloody Mary.

The worst time I embarrassed myself in front of a bartender wasn't what you'd expect.

I was in New Orleans. It was Ash Wednesday, and over the previous few days, I'd caught more beads than I could count at the Mardi Gras parades that passed down Magazine Street. Before driving back to Memphis, my traveling partner and I stopped into Juan's Flying Burrito with friends for a round of tacos. I ordered a Bloody Mary to ease the pain of the multiple-day party and asked the bartender if she could make it "light on the vodka."

The stares that came my way made me feel as if I'd knocked into the DJ at a dance party, and my friend ribbed me the entire way back to Memphis. I didn't care, though — I was too busy trying to hold my still-aching head below visibility level as he drove, the scenery on I-55 flying past the window.

All that said, I still enjoy a good Bloody Mary — and I drink mine at regular strength these days. But why, I recently wondered, wasn't I drinking other tomato-based cocktails? So I sized up the summer bounty at Memphis Farmers Market's newest pop-up market, MFM Squared, which occurs every Wednesday evening in Court Square. I purchased sweet and tart tomato varieties of every shape and size, with tints that ranged from ruddy pink to deep purple.

The choice can be overwhelming, so keep this tip in mind: yellow tomato varieties are usually the sweetest, while green varieties can be the tartest. Pink and red tomatoes are usually well-balanced between the two flavor profiles. Ask farmers for their "ugliest" tomatoes, which may be cracked or misshapen, but still taste delicious. 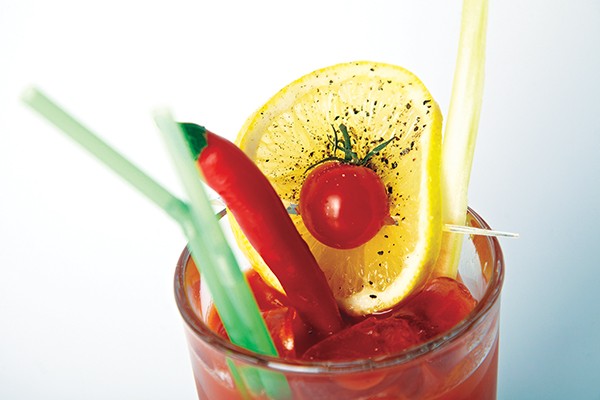 Then I headed to the internet, where I found dozens of cocktail recipes.

First, I tried the exotic-sounding Summer in St. Leonard, a vodka-based drink that uses fresh tomato watermelon water as its base. Found on Bon Appetit's website, the recipe was simple enough — puree four large tomatoes with approximately two pounds of watermelon and a tablespoon of salt, then strain the pulp through cheesecloth to make a gallon of "water." Combine three ounces of that concoction with an ounce of vodka, stir with ice, then strain into a coupe glass. The drink was so light and refreshing that I enjoyed several throughout the week as the temperatures soared into the upper 90s.

The Tomato Margarita recipe I discovered at SeriousEats.com utilizes a similar juicing method. To make a post-work margarita, I pulsed an overly-ripe Cherokee Heirloom beefsteak tomato with a cup of tequila, then strained. I skipped making the fennel salt the recipe called for, although it seemed simple enough — I just didn't want to turn on my stove long enough to toast the fennel seeds. Instead, I used a lime wedge and kosher salt to salt the rim of my tasting glass, then poured three ounces of tomato tequila, two teaspoons of agave nectar, and fresh lime juice into a cocktail shaker and added ice. I shook it, strained it, drank it, and immediately made another one. More savory-tasting than my go-to margarita recipe, this cocktail quickly vaulted to the top of my list.

Another cocktail I really enjoyed drinking and making: The Rickey Tomato, found in the pages of Food & Wine magazine. A differently acidic take on the traditionally lime-based Gin Rickey, this drink appealed to me because there was little prep work to do before (ahem) enjoying the fruits of my labor. All I had to do was muddle three very ripe cherry tomatoes in the bottom of a mixing glass, then add one and one-half ounces gin, three quarters of an ounce of St-Germain, an ounce of Vermouth, and a pinch of sea salt. I shook the ingredients with ice, then strained into a highball glass with fresh ice. I garnished the glass with a cherry tomato and a sprig of cilantro, and drank.