Imagine being the head of Fox News and realizing every day when you wake up that you, Rupert Murdoch, are the most powerful man on earth, that you set the agenda for the world's greatest super-power — the United States of America. Oh sure, President Trump is the titular head of the country, but it's patently obvious that Fox News is where Trump gets his policy ideas. And it's Fox News that literally shapes his world-view.

Trump often seemingly watches Fox News from morning to night, live-tweeting statements made by its hosts and guests within minutes of their being broadcast. Last weekend, the president went on a 50-tweet bender — 20 tweets on Saturday; 30 on Sunday — much of it directly lifted from Fox talking heads in real time. 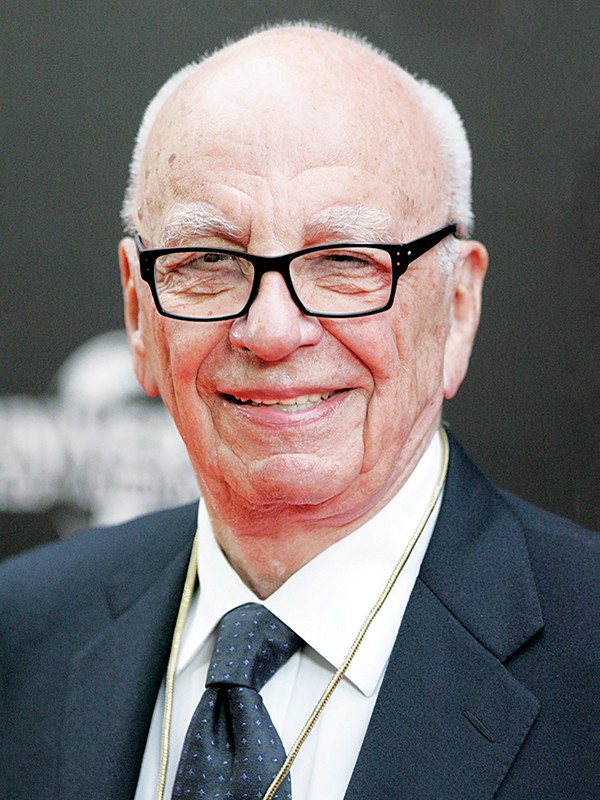 He began his Saturday by tweeting clips of Lou "Natic" Dobbs, who called Trump's veto of Congress' vote to stop his "national emergency" declaration "stirring." He then tweeted Fox News hosts' statements bashing his own Justice Department; he ranted about Hillary Clinton; he tweeted about a Fox story on a Massachusetts sheriff who praised him.

Then he got into some mild criticism of his media mind-melders, going after Fox for canning "Judge" Jeanine Pirro, Trump's wacko late-night cheerleader. "Bring back @JudgeJeaninePirro," the president demanded, adding, "The Radical Left Democrats, working closely with their beloved partner, the Fake News Media, is using every trick in the book to SILENCE a majority of our Country."

Quite a morning. But Trump was just warming up. Former Watergate prosecutor Ken Starr appeared on Fox and claimed that the late Senator John McCain had a "dark stain" on his career because he released the Steele Dossier to U.S. intelligence services. On cue, minutes later, Trump tweeted that "dark stain" quote, adding that "last in his class" McCain had "far worse stains."

Nevermind that McCain wasn't last in his class or that, after being given such a document, turning it over to intelligence services was the right thing to do — or that he was a wounded combat pilot and war hero who died of cancer six months ago. Nevermind decency, common sense, graciousness, or any semblance of mature adult behavior. We're way past any of that with this president.

Trump finished his Saturday by threatening to sic the FCC on Saturday Night Live for making fun of him. It's unclear if the president knew it was a rerun.

Sunday, it was more of the same — raw, unhinged id. The president rage-tweeted about the Democrats trying to steal the 2016 election "at the ballot box." Then he spouted some more Hillary bashing, and ranted some more about the FAKE NEWS MEDIA. He ended the day in a frenzy, retweeting 15 supportive tweets from sources that included a Pizzagate conspiracy theorist, a QAnon cult believer, and a guy who claimed the New Zealand mosque massacre was a false-flag operation to limit gun rights.

This is not normal. These are the ravings of a mentally unstable man. If your grandfather spent his weekend doing what the president of the United States just did, you'd get him help. Or maybe try to move him into assisted living.

The leader of the free world, who has a country to run, after all, spent all his waking hours for two days watching television and tweeting about it. The mind boggles. How does it happen? Is he all alone in his room? Does no one think to go in and interrupt him or divert him or tell him he's being foolish? Where's his wife? His daughter? His chief of staff? The president of the United States is bouncing off walls, locked in a television trance, spewing nonsense and conspiracy theories like a crazy man, and nobody does anything about it? In his last days as president, a drunken Richard Nixon went around the White House talking to presidential portraits. That was bad. This is next-level stuff.

Unfortunately, it looks like we are stuck with this madness for the foreseeable future. The president's cabinet is filled with unqualified hacks, lobbyists, and grifters. The vice president is a mewling sycophant. Republican leaders seem committed to remaining inalterably linked to the president, no matter how loony he gets. His base has become a cult, supporting their hero no matter what he does or says.

At this point, our only hope for getting out of this appears to be Robert Mueller. Or maybe Rupert Murdoch.