The Tigers’ coach takes on a fresh season with lots of new faces — and lots of question marks.

This month marks the beginning of Tubby Smith's 27th season as a college basketball coach. But only his second at the University of Memphis. His first on the Tiger bench ended with, at best, mixed reviews. The Tigers finished 19-13, good enough for fifth in the 11-team American Athletic Conference. (Smith will remind you this is precisely where the team was picked to finish.) But 19-win seasons that fall short of the NIT, let alone the NCAA tournament, are considered face-plants by much of the remaining Tiger fan base, a base that is dwindling if you count the empty seats at FedExForum on game nights.

Smith's second season in Memphis will be very different. The departure of three starters with eligibility remaining — most notably brothers Dedric and K.J. Lawson (along with their father, Keelon, who served as Smith's director of player development) — forced a significant transformation of the Tiger roster. A pair of junior-college All-Americans — guard Kareem Brewton and forward Kyvon Davenport — will be among the new faces counted upon to help the Memphis program regain national traction. (In the preseason AAC coaches poll, the Tigers were picked to finish ninth in the now-12-team league. Welcome aboard, Wichita State.) 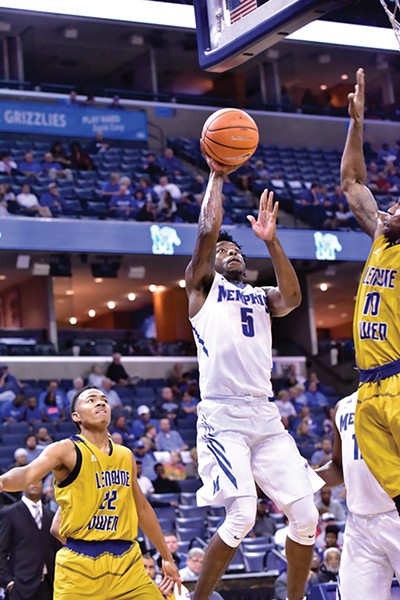 During a recent visit in his office on the U of M campus, Smith discussed his Tiger tenure to date, and what's ahead for the embattled program.

Is it a relief for this season to arrive, for games to finally be played?

Changes are inevitable in every organization, but in sports more than anywhere else. From junior high on up. People are moving; our society is mobile. It's good to have signed the class we did, the No. 1 class in the American Athletic Conference. That was a big relief, knowing we have talented players coming in.

You don't want to lose anybody, but I can't really pay attention to what people think or say. Everybody has an opinion. They don't know the inner-workings. You may think you know about what's going on at FedEx or with the Grizzlies. But you're dealing with human beings, personalities. And then 17-to-20-year-olds, they're being influenced by a lot of different stimuli.

Aside from years you've changed jobs, was it the most turbulent offseason of your career?

It was the most changes, without any significant problems. It's not like someone was arrested. We won 19 games. We weren't expected to win the national championship. Every player's stats improved, except one [in one area].

There was an exodus of players with eligibility remaining, most notably the Lawson brothers. With some months to reflect, how do you view this transition in the program?

We signed three good freshmen last November, players I feel will contribute a lot: [guard] Jamal Johnson, [swingman] David Nickelberry, and [forward] Victor Enoh. I've been pleased with them. Then in the late signing period, we simply signed better athletes, the junior-college players.

Is the Tiger program better off without the Lawson family?

I don't want to comment about the Lawsons. It isn't anyone in particular, because we had Markel [Crawford]. Think about Chad [Rykhoek]. We were going to try and get him a fifth year of eligibility. Sometimes you don't know what the internal distractions are for players.

This is a bit personal, but are your feelings hurt when players choose to leave your program?

No. Never. I'm disappointed, because I wonder what we did wrong. Did we not try and do everything we said we'd try and do? They might be disappointed with playing time or that we didn't go to the postseason. We held them accountable for the most part.

At your season-opening press conference (September 29th), you emphasized that members of the current team are "our players." What do the players share in common?

By "our" I meant the community and the city and the university. They're representing this city, this conference, and their families. I want players to believe in Tubby Smith. I believe in you [as a player]; that's why we signed you to a scholarship. The relationship should continue to grow, and the experience will be wholesome, in a good environment. It's not about being happy, but about achieving your dream. When you hear the negative stuff, they're not part of our program. They may not be a fan of yours, may not be a fan of Tubby Smith's.

Have Jeremiah Martin and Jimario Rivers — the team's returning starters — emerged as the kind of leaders this team will need?

They're trying. Jeremiah's not one to be very vocal. But the best leaders lead by example. People would rather see a sermon than hear one. They want to see that your words and deeds match your responsibility. I've been impressed with Jeremiah, but I expect more, in all areas.

Jeremiah's in a unique position as a veteran leader but younger than some of those he's expected to lead.

People can lead at a young age. My son went to a [private academy], where 9th- and 10th-graders outranked him. I told him that's the way it is. I've got younger people I have to answer to. Kareem Brewton was a leader for his team [Eastern Florida State College]. Malik Rhodes is a tough, hard-nosed guy. Mike Parks is big, physical. Karim Azab has been here a year now. These are mature men, and a lot bigger than we had last year.

Size and depth were ingredients your first Memphis team lacked. A glance at this year's squad indicates it's bigger. Will it be deeper too?

Last year we tried to put in two or three guys at a time, and we'd see a dip. I was disappointed. The rotation was disrupted when Chad went down. The depth this year ... I don't know who will start. It's a great problem. When I meet with guys, one-on-one, I tell them what they have to do to earn minutes. Not start; just earn minutes. That will evolve and can catapult you into being a starter. It's going to be competitive.

Last year may have been the first team I've coached that got outrebounded for the season. That was a real problem. We got outrebounded by 21 against Connecticut last year ... and won the game.

This group includes guys who can rebound at every position. We're bigger and taller at every position except point guard [where Martin returns]. Raynere Thornton [6'7" and 235 pounds] will play multiple positions. Kyvon Davenport is taller than Raynere and has perimeter skills. Players have evolved; they want to be versatile. They all want to be LeBron James! It's our job to come up with an offense, a system that will utilize their skill sets. Mike Parks is a big man [6'9" and 270], but he can really shoot the ball.

You gotta define roles. This is the biggest challenge for any coach, and [players] have to accept the roles. A kid has to accept the truth.

Memphis basketball fans have a short fuse at times. Were you taken aback by the criticism when last season turned sour over the final month?

It didn't bother me. We won 21 games at Minnesota and went to the NCAA tournament [in 2012-13] and they still question what you do.

Are you able to shut off the noise when you go home?

There's nothing to shut off. It never enters. I'm too old for that. I've been around too long. It doesn't help me to listen to it. The other day someone told me, "Someone wrote a nice article about you, Coach." Oh, really? "Did you read it?" No.

I'm reading scouting reports. I'm on the phone. I've got my own homework to do. I tell my players about this — distractions. People tell me I need to tweet more. I've done okay without tweeting. I want to be informed, but that's what I have a staff for. What's happening with recruiting? Who do I need to call?

Has your wife, Donna, enjoyed Memphis?

She loves it. We live a pretty comfortable life. My dad used to tell me, "Don't you ever think what you're doing is work."

I tell my guys: moderation. Everything in moderation. The great John Wooden talked about balance. My dad was a very proud man, a wise man. How did he raise 17 kids with a 9th-grade education? How did he build a Guffrie Smith legacy? If I can be half the man he was.

What should expectations be for the 2017-18 Tigers?

Sky's the limit. I think we should win the national championship. That's what every coach's expectations should be. You're not much of a coach if you don't come in every day competing for championships. We have realistic goals. The league is going to be stronger than it's been in a long time. We have six possible NCAA–tournament teams. There are so many good players back. Wichita State is going to increase everyone's RPI. This league has that potential. We have to raise our level of play to be one of those postseason teams. I'm excited about this group.

To borrow an expression from former Tiger (and current Georgia Tech) coach Josh Pastner, the collective mood around the U of M program has "gone negative" of late. The Tigers have not played a postseason game since March 2014. When you include missing out on the NIT, this is the longest drought Memphis has experienced since a four-year dry spell from 1977-78 through the 1980-81 season. But history tells us things will get better. 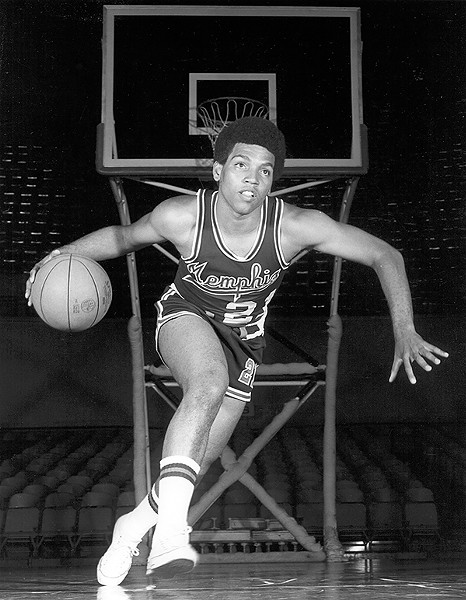 This season will culminate near the 45th anniversary of the Tiger program's most famous team, the 1972-73 squad led by Larry Finch (above) that came one Bill Walton short of winning the national championship. It will also mark 25 years (this can't be true) since Penny Hardaway delivered his last no-look pass in a Tiger uniform. Moving further along the Tiger-hoops timeline, this is the 10th-anniversary for the 2007-08 team, a group that reached No. 1 in the country and played for the national championship, banner or no banner.

The Tigers experienced losing seasons — actual losing seasons, with more losses than wins — between each of those seminal moments that have come to define the program. Whether or not Tubby Smith leads the next memory-making season for U of M basketball remains to be seen. But it will happen. So deep breaths, Tiger fans. Raise a glass for three special anniversaries this winter, and be ready to mark the next. — FM