Report considers whether the coal ash should remain in place or be moved off-site.

In August 2014, the Tennessee Valley Authority's (TVA) board voted to retire its Memphis coal plant by December 2018 and replace it with a 1,000-megawatt natural gas plant. That process is underway, and now TVA is focusing on closing one of the two ash ponds on the coal plant's site.

The West Ash Impoundment, a retired coal ash pond near the Allen Fossil Plant in Frank C. Pidgeon Industrial Park, was the disposal site for waste products from the plant until 1978. It was replaced by the newer East Ash Impoundment. The West Ash pond has only received small amounts of combustion coal residuals (CCR) since then, typically when the East Ash pond was being worked on. 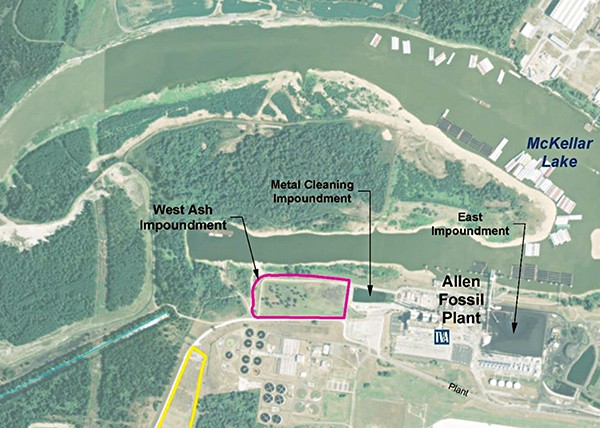 "CCR is a result from the coal-burning process. You can have bottom ash from the bottom of the boiler. You can have fly ash, which goes into the air and is collected," said Amy Henry, the manager of TVA's National Environmental Policy Act program. "Some of the processes use water to push [the CCR] out through a pipe into an impoundment, and that's why [the impoundments are] wet."

Active ash impoundments, like the East Ash pond, are wet, but since the West Ash pond has been out of use for a while, it doesn't look like a pond at all. The pond has been filled in with dirt, but TVA wants to permanently close the pond, either by covering the area with an impervious cap or by trucking the CCR material off-site to the South Shelby Landfill.

Those are the two options TVA is considering in the ash pond closure's Environmental Impact Statement (EIS). While both were studied in the EIS, the report recommends the permanent cover option over the option to truck material off-site. The public is invited to comment on that report through February 24th. Later in the year, the TVA board will vote on one of the two options.

One of the reasons the EIS recommends what they're calling "closure in place" over "closure by removal" is the potential for a traffic accident as trucks haul the coal ash from the industrial park to the landfill.

"With closure by removal, we would predict a higher risk of impacts in the traffic system, potentially accidents if there were more trucks on the road," Henry said. "We'd have to take a look at the impacts on the community and where these routes would be going."

The Environmental Protection Agency (EPA) has determined that CCR is nonhazardous, but the Sierra Club's Tennessee conservation program coordinator Scott Banbury has a different stance.

"The EPA says it's not hazardous, but we disagree because within this material are toxic heavy metals, and that can have a huge impact on aquatic communities," Banbury said.

Banbury believes leaving the coal ash where it is could have more potential negative impact than moving it out. The ash ponds are currently unlined, meaning there's nothing separating the waste from the ground underneath.

And even though the closure-in-place option would include a cap over the top, Banbury fears the ash could still seep out into the groundwater underneath and eventually make its way to into nearby McKellar Lake. Although signs are posted to discourage fishing in that lake, Banbury said many people still fish there to feed their families.

By contrast, the South Shelby Landfill is lined, so if the TVA were to truck the material out of the pond and into the landfill, it'd be moved to a lined containment. But Banbury said the landfill isn't ideal either.

"Our preferred alternative is for them to remove it from this unlined pond and construct a new one with a liner underneath it," Banbury said.