The second in a series of exhibits organized by Mary Jo Karminia.

"Unchained II" sounds like a gore/horror film. It would be set on a remote California mountain and be about crazed starlets, who, after escaping a cult kidnapping, go on a chainsaw rampage and exact revenge on those who wronged them. Unchained II would be a '90s remake of the original Unchained, which would have been made in the '80s, and have the Van Halen track "Unchained" (David Lee Roth sings: "Unchained! Ya, you hit the ground running!") as its theme song.

Unfortunately for Black Lodge customers, "Unchained II" is not (at least, probably not) a '90s gore flick. It is the name of a new group art exhibition at the Rozelle Warehouse, featuring work by eight local female artists. The artist Mary Jo Karimnia organized the exhibition by inviting one artist, who in turn invited another artist, who invited another, until a collaborative chain of participating artists curated the show in grassroots fashion. The exhibition, the second of its kind in Memphis, is "unchained," then, because it is off the hook (cool) or because it is a collaborative effort in an artist-run space and therefore unchained from usual gallery strictures. 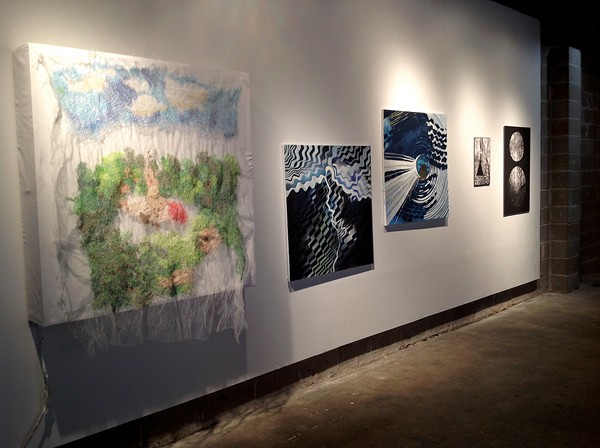 Karimnia says that one of the interesting things about the "Unchained" shows is discovering accidental synchronicities between the artists' work. Accordingly, this year's exhibition features a lot of material-heavy, collage-based works. The work in the show varies in quality but all of it is warmly and carefully presented, a hard quality to come by in too many traditional galleries.

Stephanie Crosby's digital black-and-white photography is drawn from "Empty the Cache," a series of forest landscapes interrupted by blacked-out shapes. Smoke Break shows an angular vine interrupted by a clean black triangle. In For the Afternoon, two black squares create mini-voids against the backdrop of an eroded hill. Crosby says that she hopes the interruption of these void shapes will allow the viewers to see the image without understanding it as a clichéd landscape — to proverbially empty their mental cache. 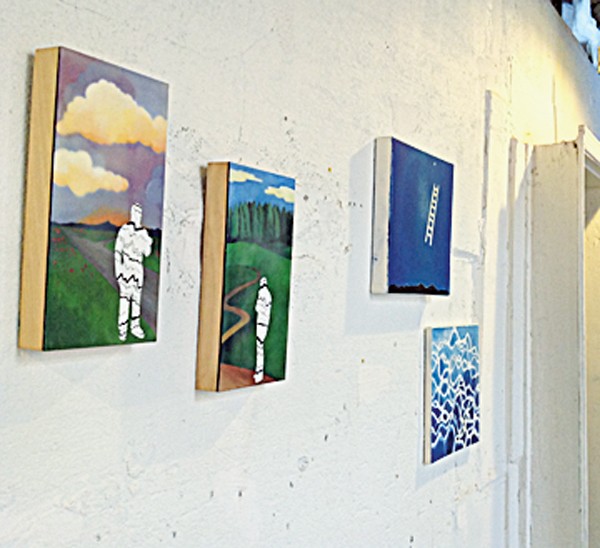 Crosby is partially successful. One way of dealing with clichéd images is to negate them, override them, or deconstruct them with anti-images (a black triangle, a black flag), and she does that. But put beside her earlier work — meticulous color series such as "Cosmos" and "Primitive Plants" — "Empty the Cache" falls flat. Crosby is capable of making landscape photographs that have a painterly depth, that the viewer cannot help but encounter slowly. Her traditional work doesn't risk cliché, so why try to disrupt it?

Elizabeth Owen's "Hand of God Series" also plays with worked-over images. Her colored-pencil and laminate paper collages of Mary, Jesus, and Joseph reference a very identifiable Medieval aesthetic and are surrounded with cheap-o glitter and cut paper. Pieces like Holy Family are getting at something interesting but could go further. Owen's methods could be pushed into a realm of glittery saints and neo-folk altars. (The transcendent shiny collage work of Thomas Lanigan-Schmidt comes to mind.)

Two different artists, Meghan Vaziri and Kerri Dugan, use light boxes to high effect. Dugan's fetchingly named Mars Science Lab Heatshield/Gale Crater #12 is a strange radial, planetary collage that looks like both a crater and a color wheel. It is a mysterious piece, radiant with either cosmic or chemical interior light.

Vaziri's Susanna & the Elders, a tableau of a woman bathing in a glade while a man looks on, is stitched from wool, silk, cotton, and tulle and backed with a lightbox. Vaziri uses the tulle (a French-originated fabric used to make tutus, wedding veils, and lingerie) expertly. Vaziri is a painter, and Susanna is a painting without paint, in that it captures the artist's painstaking gesture and holds it. Vaziri perhaps takes cues from artists such as Elizabeth Gower, whose ethereal but heady 1970s works on fabric were taken up by the Women's Art Movement. Susanna is especially un-photographable and should be seen in person.

Karimnia says it was an accident that "Unchained II" is an all-female exhibition, but much of the work in the "Unchained" exhibit shares an attention to traditional women's-work materials (beads, fabric, beeswax). This influence may stem from Karimnia's paintings. Karimnia's Catrina depicts a contemporary man with his arm around a woman in elaborate historical costume and dressed with "seed beads," those infinitesimally small plastic beads that are dangerous to children and animals. Karimnia makes her paintings from photographs that she takes at anime and cosplay conventions that she attends with her daughter.

Like many of the works in the exhibition, Karimnia's works are colorful and likable but laboriously made and unexpectedly heavy, both in material and content.