In what must be a coincidence, both major productions that filmed in Memphis in 2019— Bluff City Law and Uncorked — have protagonists named Elijah. But there is where the similarities end. The NBC series Bluff City Law was led by Jimmy Smits as Elijah Strait, a seasoned lawyer and pillar of his Memphis community whose personal life was considerably more messy and morally ambiguous than his professional reputation would suggest. Smits is a great actor, with a commanding screen presence, but his Elijah was an idealized hero for prime-time, network TV morality plays. He never felt like someone you could run into on the street, even as we were actually running into Jimmy Smits on the streets of Memphis.

Uncorked, the feature-length Netflix production which recently debuted on the streaming service, is the story of a young man named Elijah (Mamoudou Athie) who is much more recognizably a Memphian. He's working two jobs: one in the family barbecue restaurant and another at Joe's Wines and Liquors. The opening montage (writer/director Prentice Penny loves a good montage) puts the two culinary pursuits on equal footing. The care with which a vintner chooses grapes and oversees the exacting process of turning them into wine is the same as Elijah's father Louis (Courtney B. Vance) puts into selecting the perfect rack of ribs and the right balance of woods to smoke them. 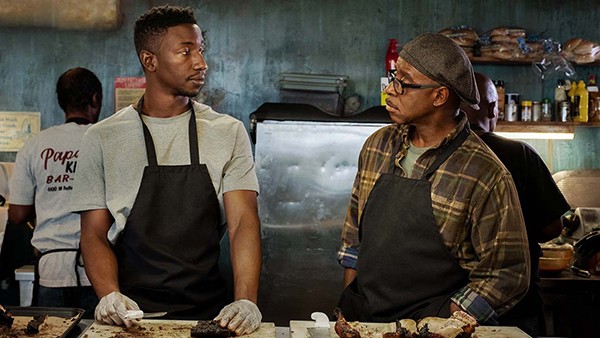 One thing Uncorked gets right about Memphis barbecue is the deeply personal connection our restaurateurs have with their cuisine. Pork barbecue is a fundamental part of the culture, and for the predominantly African-American families who pass down recipes from father to son, the barbecue business has been a ticket out of grinding generational poverty. Louis is intensely proud of the restaurant his father founded. "This place is historic! Frankie Beverley had a stroke over there," he says.

The restaurant is wildly successful. When we first see it, there's a line out the door. (I had a little pang of COVID-19 angst when I first saw the crowded dining room. When will we be able to gather over pulled pork sandwiches again?) It brings in enough to support the whole extended family, who are all expected to pitch in to make it run smoothly. While Louis is the gruff patriarch, mother Sylvia (Niecy Nash) is the heart of the place, and the glue that keeps the family together.

Elijah loves his family, but he's also intensely aware of his own place in the clan's hierarchy. He's quiet, sensitive, and frequently drowned out at the dinner table by his more boisterous sisters and cousins. Where he really comes alive is at his other job. Elijah's got a passion for wine and a talent for selling it. He successfully flirts with his soon-to-be new girlfriend Tanya (Sasha Compere) by comparing wines with hip-hop artists. And, like any good wine- and hip-hop-head, he is a little deflated when she says she'll take the Drake.

Louis wants Elijah to follow in his footsteps and become the third generation to run the restaurant. He's even planning to open a new location. "The neighborhood is gentrified. You know, with white folks."

But when Elijah gets an opportunity to take the entrance exam for a prestigious sommelier school, he takes it, and, to his surprise, he gets in. This seeming good fortune brings to a head the simmering conflict with his father, who not only doesn't understand his son's ambitions, but doesn't even drink wine. It's up to Sylvia to encourage her son to follow his dream.

There are still major barriers for black filmmakers to realize their dreams, but the success of Prentice Penny, a producer on HBO's Insecure and Uncorked, which was the most-watched film on Netflix last weekend, is surely a sign of progress. Taken together with The Photograph from earlier this year, it portends a new wave of post-Moonlight, black-centric dramas that keep the stakes at the personal and familial levels.

Penny has learned the lessons of Tyler Perry's career, but Perry is a much better producer than he is a director, while Penny has chops in all areas. Athie is an amiable presence and able actor, while Vance is totally believable as the distant father figure. It's Nash, the veteran comedy actor, who steals the show with a varied and nuanced performance.

Through the lens of veteran cinematographer Elliot Davis (who shot Steven Soderbergh's groundbreaking Out of Sight in 1998), the Bluff City's shabby glory shines through. Uncorked is a film made by an outsider that gets Memphis right, and that is a rare vintage indeed.