It's a "social situation" at Sage.

I barely made it in the door of Sage Memphis when the thunderstorm hit. It's a full-on monsoon outside, and Sage, despite being a reliable shelter and serving alcohol, is relatively empty. Because I don't let thunder and lightning spoil my good time, I am determined to find out more about this adorable bar tucked in at 94 S. Main. I have eyes — I've seen their Instagram. I've perused Twitter. And I am pissed no one told me about this place.

"It's a slow night," says Khadijah, the bartender. This works out well because then she lets me monopolize her time and find out all about Sage's drinks, menu, and future plans. Saturdays are their busy nights, with Sunday brunches close behind. It's not difficult to see why: Despite being a kick-ass bar bathed in green light (sage!), the food is way beyond that of a humble bar. Pair the food with the kind of drinks Sage is serving up and you've got a winning combo in Downtown Memphis. 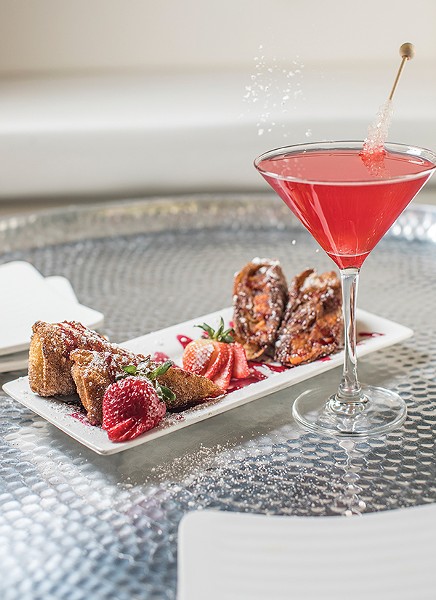 Because thunderstorms make me a little squirrelly, I order the Allure martini, which is a chocolate-based drink with Bailey's and amaretto. My friend and I also try the Esquire, a mix of Old Dominick's Huling Station bourbon and Grand Marnier, and the Mane Street Mule, which has Jack Daniel's, ginger ale, and a strip of candied bacon.

These are all off-brand drinks for me, but if a restaurant is going to put candied bacon and Bailey's martinis on a menu, by God, I will drink them. The brunch menu has a specialty mimosa, the Triple C, made with Camus cognac and prosecco, and for those with a sweet tooth, the cotton candy mimosa made with rosé champagne and elderflower. The fun drinks aren't just for brunch; Khadijah says her favorite drink to make is the Molly Spaulding, a martini made with whipped cream vodka and served with a lollipop.

Khadijah is also a spectacular ambassador of Sage's food. She fascinates with descriptions of the beignets (made from homemade biscuits), the Soul Waffle (two waffles stuffed with fried chicken, macaroni and cheese, and greens), and the daily lunch specials (tilapia with gouda grits some days, crawfish mac and cheese the next).

It's on her recommendation that we try the Soul Egg Rolls, which, like the waffle, are made with chicken, mac and cheese, and greens — and holy moly, they're incredible. Sage doesn't shy away from the alcohol infusion in their food, either; the rosemary and ginger peach cobbler has Hennessy-infused Georgia peaches! Hel-lo, dessert.

After finding out how packed brunches are at Sage, I'm already planning my second visit. Khadijah knows her crowd, too: She says her brunch crowd makes Sunday feel like a "slightly earlier Saturday night."

"They have some drinks, have some brunch, maybe ride some scooters to another bar," she says, and hey, South Main boozehounds, isn't it nice to feel seen? Sage is exactly the type of place I'd kick off my Sunday because then, if so inclined, a person could make their way from one end of South Main to the other and hit up all the good spots and be safe at home by sundown.

It's important to note that Sage isn't the line-up-at-11 a.m. type of place because their brunch runs until 4:30 p.m. on both Saturday and Sunday (sleep it off or just sleep in; you've got time, pal!).

Khadijah describes Sage as a social situation of a bar, which is exactly the vibe it has. It's a great place to sit and people-watch from the patio, enjoy some unique drinks you won't see most other places, and plan your scooter route for the day. It's open at 11 a.m. daily and until 10 p.m. on weeknights, midnight on weekend nights, and 5 p.m. on Sunday. It's going to be a go-to for pre-gaming Grizzlies games because, uh, there's bacon in the drinks, y'all.