Prints by Jacob Lawrence at the Brooks.

Under the curatorial savvy of Marina Pacini, the Memphis Brooks Museum of Art has mounted the stunning and comprehensive exhibit "The Prints of Jacob Lawrence, 1963 - 2000."

Eighty-one lithographs, woodcuts, silk-screens, and etchings — on loan from the Jacob Lawrence estate courtesy of New York's DC Moore Gallery — fill gallery after gallery with pure pigments, bold shapes, sharply angled perspectives, and pitch-perfect storytelling by Lawrence, the late Harlem Renaissance artist who took printmaking to the level of masterwork and created a vision powerful enough to speak to all people and all times.

You'll find all of Lawrence's best works here, including the exhilarating and unnerving study No. 5 from Eight Studies for The Book of Genesis, in which a preacher grips his marble podium with his left arm while streaks of red flash from his right hand like lightning. The preacher's dark-red robe fills most of the silk-screen as his parishioners gasp and crowd against the wall while water fills their sanctuary and images of Genesis play across the alcoves and stained glass windows.

At the center of the screenprint The Capture, from The Life of Toussaint L'Ouverture series, Haitian revolutionary general Toussaint rides a white steed and wears a cloak as deep red as the robe of the preacher. Toussaint's eyes are piercingly bright. His body leans forward on the horse he rides straight toward the viewer. The print's pure-white and saturate-red color and the tall grasses that lick Toussaint's body like flames tell us his mission is full of passion, danger, and purity of vision.

Lawrence tells story after story of courageous bids for freedom. Harriet Tubman leads fugitive slaves north to freedom in Forest Creatures, and Africans, being transported for sale in the slave market, successfully commandeer a Spanish galleon in Revolt on the Amistad. 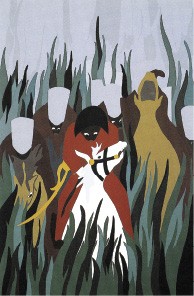 Placards accompanying these prints contain Lawrence's reflections on his life and worldview. We learn from these vividly written footnotes that he moved with his family to Harlem at the age of 13, steeped himself in books at Harlem's Schomburg Library, and reveled in the architecture and energy of the big city. This was the early 1930s. While America was struggling through the Great Depression, African-American creativity and intellectual thought was flourishing in what came to be known as the Harlem Renaissance. During those years, Lawrence developed a passion for knowledge and social justice that informed his life and art until his death in 2000.

The highlight of the show are the 22 prints in The Legend of John Brown series, Lawrence's undisputed masterwork. These are the sparest, most abstract works of Lawrence's career. They are also the most poignantly apropos for our time. In screenprint No. 1, Christ hangs on the cross back-dropped by what look like fast-moving storm clouds or the wings and beak of a large raven or an omen — readings that remind us Christ's crucifixion is a dark drama about government brutality, warring religious factions, and a friend's betrayal as well as the hope for redemption. Below Christ, a figure in dark clothing turns his head down and to the side. This could be one of Christ's disciples, John Brown, or someone today making the same tough choices, asking the same kind of life-changing questions: In what shall I place my hope? To whom shall I give my allegiance? 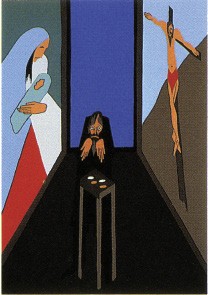 In the placard next to the final image of the series, Lawrence succinctly noted that, "Brown was found guilty of treason and murder in the 1st degree and was hanged." Instead of a storm cloud, like the one that backdrops Christ in screenprint No. 1, the shape that coalesces behind Brown's body is a soft pale blue. Jagged in some places, softly curving in others, the cloud looks, in part, like the profile of a lion or other large predator with a gaping mouth and thick strong neck. Its color and shape are fitting metaphor for the spirit of a revolutionary who was both a fanatic and a saint, a man who resorted to violence when all peaceful attempts to help the slaves were thwarted.

While much of Lawrence's art reveals what can be accomplished when people work in concert with courage and conviction, The Legend of John Brown series is a darker tale that plays out again and again in a world where slave-trafficking still thrives and millions live in refugee camps, in bondage, and in poverty. People in desperate circumstances, The Legend of John Brown reminds us, resort to desperate measures.

On a more positive note in screenprint No. 14, sharply angled images of Mary holding the baby Jesus and Christ-crucified thrust our point-of-view through a long and narrow room out into a piercingly blue sky. Beyond ego, beyond narrow concerns — like Toussaint, Tubman, and Christ — Lawrence inspires us to explore the big ideas, to trust the redemptive power of love, and to make a difference.