Webbstar: Rapper Hooks Up with CCDE to Deliver Reggae

The singer, songwriter, and rapper Webbstar has one message for music fans: Expect the unexpected. Over his years of music making, he's skipped across multiple genres, sometimes in a single song. Starting as a young rapper, his first record, Cuffing Season, also showed considerable melodic and R&B chops. The dawn of 2020 saw him introducing serious rock elements into his sound, especially with the single, "Shine," which could be a collaboration with Gary Clark Jr., but it really springs from his partnership with Micah Wilshire and Ryan Peel. Peel has been integral to Webbstar's most recent work, further broadening his production palette this summer in having him record with local reggae masters Chinese Connection Dub Embassy (CCDE).

That stroke of genius yielded two hot summer singles, "Bad Bad Ting," a tribute to a certain woman's hotness released under Peel's name, featuring both Webbstar and CCDE, and the politically woke "Dem A Callin (Flodgin)," credited to CCDE, featuring Webbstar. Now, under his own name, Webbstar has released a new single created by the same collaboration, the hypnotic reggae soul of "South Memphis Woman."

The stylistic shift might surprise anyone who's known Webbstar as Derrick Webb, a rapper since grade school, when he had a partner who's since gained considerable acclaim. "I also work with Memphis Track Boy," Webb explains. "He produced a lot of stuff for Moneybagg Yo, BlocBoy JB, and other big-time guys. And a lot of Cuffing Season was done with Memphis Track Boy. He's had a lot of success. But I've known him since third grade! Then we started doing music when I was a sophomore in high school. By 10th grade, I had already recorded a mixtape. And he was doing beats already. He had a studio in his mom's house. So we linked up, and the next year, I created a song for my football team. I was a junior at Whitehaven High School."

Football fed his rap talents, but also opened up new perspectives when he got a scholarship to play with the University of Colorado Buffaloes. "I did all that rapping in Memphis, then I went to college in Colorado, with a whole different scene, a whole different culture. I started to really explore different music styles at that time. And I'd say that made me a songwriter. It gave me the ability to move between genres. There's a lot of different ways into the game." 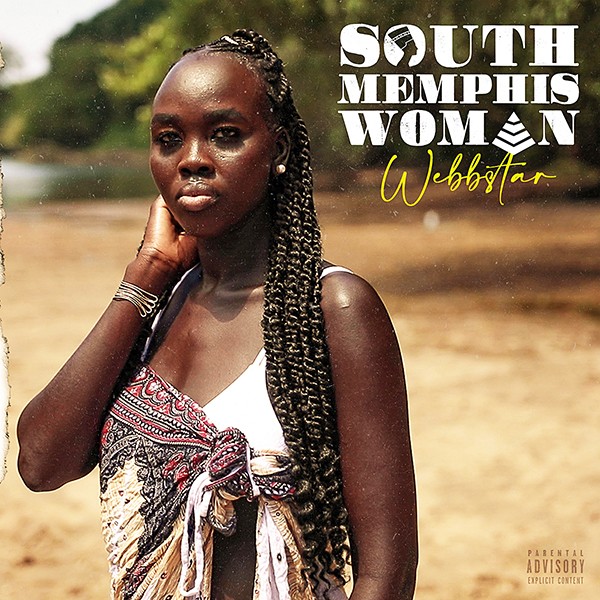 "South Memphis Woman," for example, first grew out of Webb's other great musical love. "My granddaddy used to always play the blues," he says, "taking me to football games on Saturday mornings. So I had the blues feel, like most Memphis children do." And that's what he had in mind when writing the song. "'South Memphis Woman' had been in the works in my head, only in my head, for about a year. And I imagined doing it as some kind of soulful blues ... a kind of hole-in-the-wall type of feel."

But then came his sessions with CCDE. "We started getting in the studio together, and Ryan brought it up. And when we created it right there on the spot, with Chinese Connection Dub Embassy, they took it in a reggae direction, and it was perfect. I think it was just meant for them to be on that song. They're so talented, as soon as Ryan told them the idea, we made it immediately. Right there on the spot. That's all it took."

The track sports CCDE's trademark groove with subtle atmospherics, Webbstar's soulful singing, background vocals, and horn punches, adding up to a sound evoking reggae from decades past. As Webb notes, it may not be the direction of most music coming out of Memphis, or anywhere, these days, but he's undeterred. "Because of the modern thing, some of the better reggae groups today are just not noticed. It's not in the pop culture right now. It's its own lane."

He seems to relish surprising music fans with such twists and turns. "It can be hard for people to grab a hold of it at first, until they see the consistency. I'm gonna rap, I'm gonna make some melodies, I'm gonna give you lyrical content, but I've been keeping people guessing. I want people to know they can expect the unexpected. But whatever I make, it's going to have my DNA in it."