Week That Was: the Virus (Of Course), Mud Island Amphitheater, and Black Lives Matter Avenue

COVID-19 raged on, the venue was debated, and a council committee approved a name change for part of Poplar. 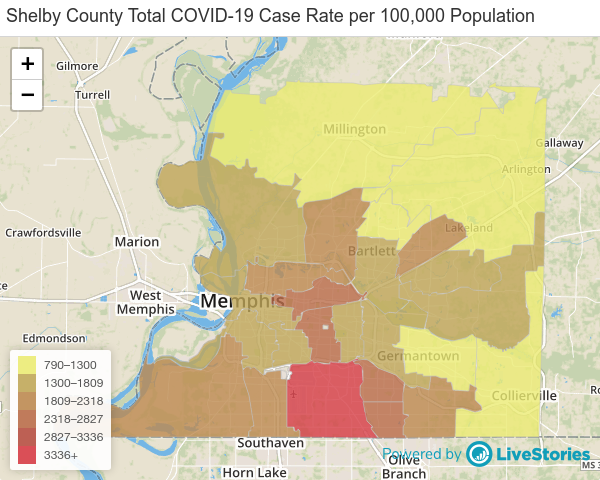 Monday
• Shelby County added 304 new cases of COVID-19 on test results reported from the prior weekend, bringing the total number of cases to 16,767. Eleven deaths were recorded on the weekend for a total of 244.

• The Mud Island Amphitheater has been quiet for a while now, but a new group announced plans to try to change that.

Jerred Price was elected president of the Downtown Neighborhood Association (DNA) in February. He formed a committee focused on reviving Mud Island Amphitheater.
Price said he hoped the group can attract corporations interested in the naming rights to the amphitheater in exchange for funds to improve it and, ultimately, begin to host shows there once again. (See image examples above.)

“(Mud Island Amphitheater) is challenging, but it can still work, and it did for years and years and years,” Price said. “It's just become not the focus. I think a lot of Downtowners are really disappointed in the condition of it.”

However, the proposal was stalled before it could make it to the full council for a vote. Another council vote that Tuesday formed a new committee that will review the renaming of Memphis city parks, streets, and place names.

Should the Black Lives Matter renaming pass out of committee, it would then head to the Land Use Control Board for a final say. If approved, Poplar — between Front Street and Danny Thomas, which runs in front of 201 Poplar — would get the name change.

• The Humane Society of Memphis and Shelby County (HSMSC) was searching for people to foster shelter animals, especially kittens.

Society officials said kittens are susceptible to disease and can’t stay in the shelter environment for long. Last month, the shelter’s kitten intake was up 236 percent, compared to June 2019.

While they get more puppies and kittens during warmer months, officials said they received three times the requests this year due to a variety of reasons related to COVID-19, such as limited facilities offering spay and neuter surgeries, as well as fewer shelter options for surrendering litters.

Thursday
• Riverside Drive will reopen to vehicles on Monday, August 3rd, but will close again on weekends, according to the Mississippi River Parks Partnership (MRPP) last week.

The group said the street will close each Friday at 6 p.m. and open again at 6 a.m. on Monday mornings "to allow people to use the street and park safely." The Tom Lee Park parking lot will remain closed.

• Shelby County added 429 new cases of COVID-19 on test results reported since Wednesday morning, bringing the total number of cases to 17,255. The death toll rose by five to 256.

• The MRPP, in response to an announcement from the Downtown Neighborhood Association (see above) regarding Mud Island Amphitheater, said refurbishing the venue would be costly and was more complicated than just upgrading the amphitheater itself.

George Abbott, director of external affairs for the MRPP, said the amphitheater should be considered a part of the entire Mud Island River Park. To deliver the venue as a “minimum viable product” — for safety upgrades to even allow shows back there at all — would cost $2 million. But to do it right for modern productions, it would cost more than $10 million.

“I don't think there's really anyone who disagrees with the fact that we've got an asset on our hands,” Abbott said. “The discussion really is, again, we need the right partner to be in place, to operate this at a level that we all want to see here in Memphis.”

For fuller version of these stories and even more local news, visit The News Blog at memphisflyer.com