Thursday’s positive rate spiked to 13 percent, and a record number of virus patients were being treated in area hospitals. Friday and Saturday totals found virus rates stabilized to around 7 percent but rose again on Sunday to 9 percent.

Curfew Lifted
In maybe the briefest of news briefs of all time, the city of Memphis announced Monday morning (June 8th) that … well, you can read it up there, but "Memphis curfew has been lifted."

The lift came after nearly a week of curfew issued from Memphis Mayor Jim Strickland to stem protests here after the police killing of George Floyd in Minneapolis.

Poor People’s Campaign Against Racism
A couple dozen people gathered in Downtown Memphis last Monday to rally for justice and an end to systemic racism.

The demonstration, organized by the Poor People’s Campaign, took place in Army Park, where a historical marker stands commemorating the Memphis Massacre of 1866. The massacre lasted three days, over which a white mob led by law enforcement killed approximately 46 black people, raped several black women, and burned churches, schools, and other black establishments.

After reading the words from the historical marker, Rev. Edith Love with the Poor People’s Campaign said violence by white people toward black people has not stopped, but that “it has merely evolved."

Braking on Back to Business
Shelby County and its cities should not open more economic and social activities until at least June 15th, the Shelby County Health Department said last week.

On Monday afternoon, the health department issued its recommendation on moving into Phase III of the county's Back to Business plan. Health officials here delayed moving to the next step last week. Also, Memphis Mayor Jim Strickland pushed the city's move to Phase III to Tuesday, June 16th.

“The recommendation comes after careful analysis of data since the move to Phase II on May 19th, 2020," reads a statement from the health department. "We have seen an increase in daily case numbers, particularly after the Memorial Day weekend. For that reason, Shelby County Mayor Lee Harris and the Shelby County Health Department have decided to maintain the current COVID-19 response level at this time." 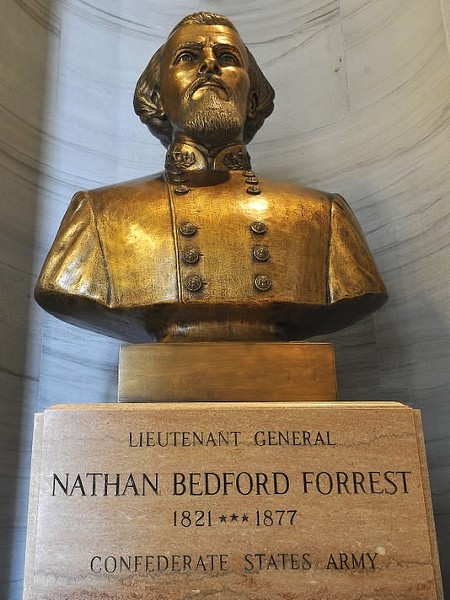 Rep. Rick Staples (D-Knoxville) brought his ideas on removing the bust back to lawmakers after the Tennessee General Assembly broke earlier this year on COVID-19 concerns.

Staples’ original resolution sought to remove the bust of the KKK founder and replace it with two African-American Tennesseans — Anne Davis, who worked to establish Great Smoky Mountain National Park, and William F. Yardley, the first African American to run for governor in Tennessee. Staples broadened his original resolution with an amendment that would have allowed the bust to be of any Tennessean who worked for racial equality in the state.

The all-white House Naming, Designating, and Private Acts Committee debated the proposals for more than an hour. The debate touched on protests around the state focused on racial injustice, removing other busts and statues around the capitol building, and one lawmaker’s concern that Staples’ bill would exclude white lawmakers like her from having a bust in the capitol one day.

Staples said he was not trying to erase history, as many lawmakers have worried about over the hours and hours of debate on this topic. Instead, he said he was trying to celebrate a different figure that “touches us all in a positive way.”

One aims to increase the transparency of the complaint process for the Memphis Police Department (MPD).

The council also advanced a joint resolution between the council and the Shelby County Commission requesting that MPD and the Shelby County Sheriff’s Department adopt the “8 Can’t Wait” use-of-force reduction policy. The policy was created by Campaign Zero, an anti-police-brutality advocacy group, to be implemented by law enforcement agencies in order to reduce and prevent violent encounters.

The last resolution recommended for approval, sponsored by Michalyn Easter-Thomas, calls for Memphis Mayor Jim Strickland to form a community task force to assist in the selection of a new MPD director. Rallings announced last year that he plans to retire in April 2021.

All the resolutions were scheduled for a vote this week.

As the national conversation about defunding police departments heats up, Strickland released a statement:

“I’m opposed to defunding our police department,” Strickland said. “Over the last four and a half years, we’ve increased funding to libraries, community centers, made summer camps free, created Manhood University, W.O.W.S, and the Public Service Corps for those who need second chances, and came up with a way to fund universal needs-based pre-K, but we still have more work to do.”

“We are seeing a slight increase after we headed in to Phase II but not anything that alarms me or anything that says we shouldn’t or couldn’t move into Phase III.” — Shelby County Health Department director Dr. Alisa Haushalter tweet this
County in Virus ‘Marathon Mode’
Shelby County is now in COVID-19 marathon mode and could be for “many months to come, if not a year.”

That was the description of the current situation from Shelby County Health Department director Dr. Alisa Haushalter during Thursday’s update of the Memphis and Shelby County Joint COVID Task Force.

“On the joint task force, we realize we’re in a marathon,” Haushalter said. “For any one of you who have run a marathon, you know you have to plan ahead for the distance, knowing there will be difficult times ahead. We know we will have to make changes along the way to meet the end goal to end COVID-19 in our community.”

“Marathon mode” means many things. Officials will continue to urge citizens to wear masks when they leave home, wash their hands, and social distance for the foreseeable future. Specifically, some of the outdoor testing facilities will be moved indoors to escape the summer heat, according to city of Memphis Chief Operating Officer Doug McGowen.

Despite three days of higher-than-average case numbers last week, Haushalter said the community was ready to enter Phase III of the Back to Business Plan, which would open capacity at more stores and restaurants and allow for more social mingling. Some of the highest new case numbers came last week, with 125 cases reported for Wednesday and 129 cases reported for Monday. Haushalter said the county has averaged 65 new cases since the pandemic began here and any number over 100 is a “significant” increase from day to day. However, she said the county has only had six days over 100 new cases in the duration.

The figures put the positivity rate among inmates at about .8 percent. The positive rate for employees, though, is about 10.8 percent.

No deaths were reported among inmates or employees. No inmates have been hospitalized, though none of them have yet recovered from the virus. Only one of the employees has not yet recovered.

Memphis Gets Bike Friendly
Memphis has shown a strong commitment to improving its bike network and encouraging residents to ride, according to a report released last week.

PeopleForBikes evaluated 550 U.S. and Canadian cities for the report. Memphis ranked 60th overall with a score of 2.5 out of 5.

However, in the acceleration category Memphis snagged fifth place. The acceleration score assesses how quickly a city is improving its biking infrastructure and how successful it is at encouraging residents to ride bikes. Memphis scored 4.2 in this category.

For fuller versions of these stories and more local news, visit The News Blog at memphisflyer.com.