Week That Was: Virus Spike, Money for MATA, and a ‘Successful’ Memorial Day

The virus rate surged, MATA got $2.5 million from Shelby County, and health officials were optimistic about the holiday.

June 03, 2020
comment
For coverage of the George Floyd protests in Memphis last week, please see our more-in-depth piece later in this issue. 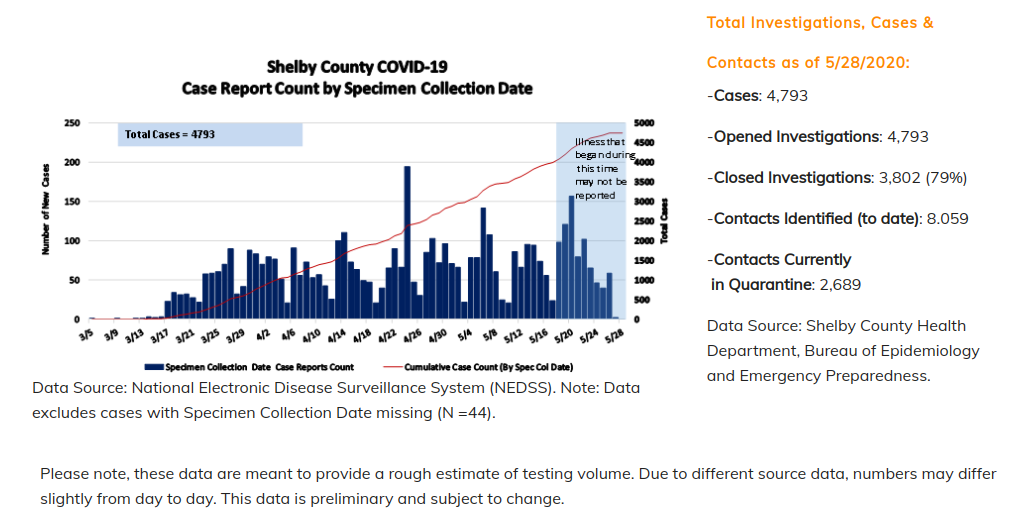 The county’s average is around 6.8 percent. Officials with the Shelby County Health Department say the number needs to remain below 10 percent to slow the spread of the virus here.

However, the number spiked to 13.5 percent last weekend. The number had not been above 10 percent since April 24th.

The number remained above average for much of last week. However, the positive rate began to slide to rates below average over the weekend.

Memorial Day ‘Successful’
Shelby County Health Department (SCHD) officials believe Memphis had a “successful” Memorial Day weekend in terms of curbing the spread of COVID-19, but won’t be certain for another two weeks.

Dr. Bruce Randolph, health officer for the SCHD, said last week “for the most part, I think this weekend was successful. We’ll know in 14 days from this weekend how successful it was. I will say, at least when I went into stores, I saw most people if not all had on facial coverings and masks.

“I consider it successful because my phone did not ring off the hook. I did not get any calls as it relates to violations of safety measures … When you look at the amount of people who were out at Shelby Farms and other places, I think people made efforts to try to maintain safe distancing.”

However, he iterated that “the virus is still present, even as we prepare to move forward, we still must practice measures,” such as the facial covering and maintaining social distancing.

“The next coming two weeks will be very important to us because it will let us know whether our efforts to move forward were wise or not,” Randolph said. “We will rely on the data. And as I have mentioned before, the data is [updated] often, and will be determined by behavior.”

Randolph said the health department has been and will continue to work with organizers of outdoor activities in order to make sure the event can be conducted in a “safe and healthful way.”

Dr. Alisa Haushalter, director of the SCHD, said the department anticipates that some may have traveled over the weekend, increasing their exposure to the virus. She said anyone who travels to a location considered a hotspot should self-quarantine when returning.

The county averaged about a 100 new cases a day over the weekend, which Haushalter said is “a little higher than we’ve had previously,” but said she is not “overly concerned.”

The uptick could be due to a lapse in social distancing as the weather gets warmer, Haushalter said. She adds that people are engaging with others more, as more people go back to work, saying that people should continue to social distance and wear facial coverings in work settings.

Since then, many, including representatives of the Memphis Interfaith Coalition for Action and Hope (MICAH) who have played a prominent role in the conversation about transit funding, have lauded the commission for making the investment. MICAH leaders said now, and as the regional economy begins to heal, a public transit system is critical.

Justin Davis of the Memphis Bus Riders Union (MBRU) expressed similar sentiments, saying the group is “happy to see the county stepping up to help fund MATA, especially in times like these.” CEO of MATA Gary Rosenfeld told the county commission that the agency plans to use the funds to implement a demand-response system in the entertainment district and the Westwood/Boxtown area, a mini-transit station near Third and Brooks, and an investment in the Bus Rapid Transit project. All three projects are in line with MATA’s Transit Vision Plan.

Davis said the MBRU supports MATA’s proposal of a demand-response system in Boxtown/Westwood, as the area has been a big focus of the group for a while.

Davis said if the demand-response model is successful and has community support in Boxtown/Westwood, then MATA should consider using that model in other low-density neighborhoods that don’t have frequent service, like Northaven.

Rosenfeld said he expects to see the demand-response system introduced in the entertainment district and in Boxtown/Westwood before the end of the year. Moving forward, Rosenfeld said, MATA is “embracing the new transit paradigm” and will consider implementing this service and other forms of alternative transit models in the future in additional neighborhoods. The Transit Vision plan calls for alternate forms of transportation in about six areas with low ridership density.

Another project MATA plans to invest in, the $75 million Bus Rapid Transit (BRT) project, mostly funded by federal grants, will be a high-frequency route from Downtown to the University of Memphis. Davis said many MBRU members are “deeply concerned” about continued investments in Midtown and Downtown, as these areas already have the most reliable bus service.

Pink Palace, Lichterman to Reopen
The Pink Palace Museum and Lichterman Nature Center will be reopening for members only beginning Tuesday, June 2nd, and for the general public the following week.

Bill Walsh, Pink Palace Museum marketing manager, said it will be a “soft opening of sorts for our members as a way to show our appreciation.”

The museum and nature center will open to the general public on Tuesday, June 9th. The theater, planetarium, Mallory-Neely House, and Magevney House will not reopen at this time. The reopening will come with special days and hours of operation, and a COVID-19 protocol that includes mandatory facial coverings, temperature checks, screening questions, and more.