With a crucial deadline approaching next week, the local “Protect the Aquifier” movement picks up steam.

As Scott Banbury, the indefatigable conservation program coordinator for the Sierra Club, has it, the Shelby County Groundwater Quality Control Board is an honorable and capable enough group, comprised of business people, conservationists, public officials, and just plain citizens, but up until now it hasn't wielded the clout that the county's Land Use Control Board, in theory, an equivalently purposed and composed group, has.

The difference undoubtedly lies in the fact that the latter group is, with reasonable frequency, asked to judge on zoning matters relating to commercial or residential developments, while issues relating to groundwater control are correspondingly rare and hardly ever regarded as so momentous.

All that is due to change next Wednesday, November 30th, when the Groundwater Control Board meets at Shelby Farms [9 a.m. at the Construction Code Enforcement Office, 6465 Mullins Station Road] to hold a hearing on the Tennessee Valley Authority's intent to drill two new wells into the natural Memphis sand aquifier that is the source of the famously pure drinking water available to Memphis-area citizens via MLGW.

Public reaction against that intent has not yet reached the intense 24/7 focus of previous (and ongoing) Save the Greensward efforts, but, to judge by the turnout at a Protect the Aquifier meeting Sunday at the Abe Goodman Golf Clubhouse at Overton Park, one of several recent meetings to protest TVA's plan, it's quickly rising to that level.

Next week's hearing with the board is the result of an appeal filed by Banbury back in August when he learned that TVA, without advance public notice and with non-existent fanfare, had issued a supplement to its existing plans for a source of water to cool the operations at a planned new natural gas power plant, one that is set to open in 2018 to replace the old TVA coal-burning plant, which is being phased out because of pollution concerns. 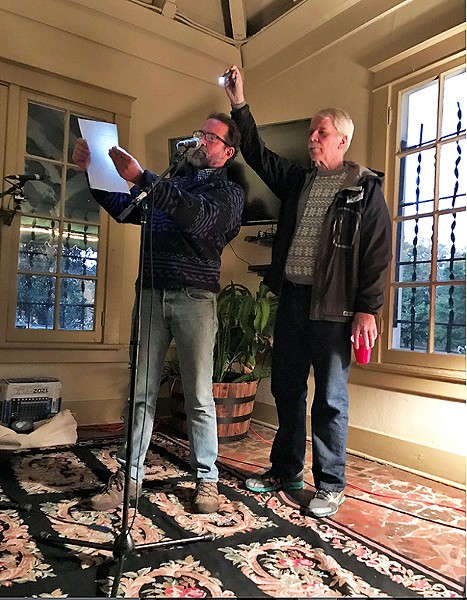 But the TVA began to see the wastewater plan as economically problematic, given what spokespersons for the authority said would be the millions of dollars necessary to spend in detoxifying the wastewater. Accordingly, TVA reversed course after consulting what Banbury describes as a "slim document" from the U.S. Geological Survey concluding that the Memphis aquifier could without undue strain supply the same amount of water for the authority's purposes.

For the record, that would be around 3.5 million gallons of water a day, an amount that Randy Blevins, who, with Banbury and Ward Archer, conducted Sunday's meeting, called "preposterous" and dangerous and —  the authority's protestations notwithstanding — a strain upon the capacity of the aquifier. At Sunday's meeting, Archer highlighted an additional grievance — that the natural-gas plant being constructed  by TVA was being "over-built" to larger specifications than necessary, apparently for the purpose of selling electricity to geographical areas far outside the immediate service area of the plant.

And, as Banbury demonstrated at some length on Sunday, the TVA wells into the aquifier would be clustered and operating at such levels as possibly to strain the clay walls surrounding the aquifier, inviting seepage into the city's drinking-water supply of "young" and relatively polluted water from the Mississippi River alluvial basin. (Incidentally, the alluvial basin itself has been suggested by critics of the new TVA plan as an environmentally acceptable source of water for the new plant's coolant purposes, but, as Banbury noted Sunday, has apparently never been considered that way by TVA.)

In any case, the Shelby County Health Department — which, according to existing county policy, rules on all requests to drill wells into the aquifier — had, by the time Banbury or other citizens at large learned of it, already given approval this year to five separate requests from TVA  for permits to drill as many wells. "As far as I can tell, the approval was done by a single individual," said Banbury.

The statutory time limit for anyone to appeal such a permit is "within 15 days of its issuance," said Banbury, who added, "Nobody has ever appealed wells before because there was never any public notice of them." The time limit for any public questioning had already expired for three of the wells, the permits for which were issued in May, June, and July. It is only the permits for the last two wells, issued in September, that Banbury was able to file a timely appeal against.

And it is that appeal which is to be considered next Wednesday by the Shelby County Groundwater Quality Control Board. The hope for those protesting is that a turn-down by the board not only would abort the two new wells whose permits are still hanging but might cause TVA to reconsider the idea of using the three acquifier wells that have already been drilled but are not yet in operation.

In answer to a question from one of the attendees at Sunday's meeting, Banbury said it was the hope of the Protect the Aquifier ad hoc group that TVA might be moved to reconsider the idea of using wastewater as a coolant for the new plant, or, failing that, to use water from the Mississippi River alluvial basin.

The three organizers of the ad hoc Sunday meeting at Abe Goodman — Archer, Blevins, and Banbury — urged those attending to contact members of the Groundwater Control Board prior to next Wednesday's hearing, and to recruit friends and neighbors to the cause. "Protect the Aquifier" T-shirts were on sale Sunday at Abe Goodman.

If that kind of preparation suggests something like a political process, it's because it is. It's true grass-roots politics — or perhaps "wellspring politics" is a better name for it — geared not to an election day as such but to a day of reckoning all the same. As Banbury explained, whichever way the hearing goes, the loser — be it the protesting citizens or TVA — is sure to appeal, and the case will likely move on to Chancery Court.

A further political aspect of the protest is that elected officials and public bodies are becoming actively involved in the outcome. Both the Memphis City Council and 9th District Congressman Steve Cohen have formally suggested that TVA consider alternatives to its intended aquifier drilling, and the Shelby County Commission, which has the power to alter the rules by which groundwater drilling permits are issued, has indicated it will place that matter on its agenda in the near future.