Burgers are having their moment in Memphis. Witness the three burger-centric places that opened just in the past few months — Oshi, LBOE, and Belly Acres. Now, don't get us wrong, we love the classics from Huey's, Earnestine & Hazel's, and Kooky Canuck, but there are folks out there who are stretching the limit of what a burger is — from the raw, to the bunless, to the innovative flourishes. Here are 15 of the city's most awe-inspiring takes on the all-American classic.

The Big Cheeser at El Toro Loco is the perfect Mexican expression of an American favorite. It's a basic cheeseburger topped with shredded lettuce, tomato, and pickled jalapeno. Then the entire burger is covered in melted Chihuahua cheese. The best part? It's topped with a cherry! It comes out looking like a beautiful dinner/dessert hybrid. The cherry is really just for show, but the Chihuahua cheese has the delicious effect of steaming the bun underneath. While it does require a knife and fork, it is truly outstanding and should not be overlooked.

In keeping with the French bistro ambiance of Cafe 1912, this burger is tres formidable, but with a gourmet feel. A hefty portion of premium ground beef is topped with Benton Farms bacon, Maytag bleu cheese (or provolone, if you prefer), roasted garlic aioli, red onion, fresh tomatoes, and lettuce, all served on a ciabatta bun. It's accompanied by a pile of skinny, crispy pomme frites, none of which will be left on your plate. Cafe 1912's burger is delicious and filling, and you'll probably find yourself using a fork before dinner is over. This goes perfectly with a nice glass of Pinot Noir, or my favorite, a Duvel Belgian beer.

Two non-beef patties, special sauce, lettuce, cheese, pickles, and onion on a dairy-free bun. Isn't that how the song went? Oh yeah, that was "all-beef patties." Well, screw that song. Imagine Vegan Cafe's meat-free version of the iconic McDonald's sandwich is much better for the animals and your health. Their vegan burger patties have a toothsome, meaty texture (this ain't no flimsy, hippie bean burger), and they're guaranteed to hold together until the last bite. The dairy-free cheddar is so melty that you'll need napkins (and maybe a fork). — Bianca Phillips

The Greek to Me

The Greek to Me burger at recently opened LBOE (Last Burger on Earth) is the perfect choice for anyone desiring to sink their teeth into a flavorful delight with a twist.

Made-to-order with fresh ground beef, the juicy 8 oz. burger is cooked medium-well and dressed with sautéed spinach, tzatziki sauce, and a dollop of roasted garlic cream cheese. Two toasted and buttered ciabatta buns hold everything together.

Reasonably priced at $9.95, the Greek to Me is enough for two people to split and will leave you full and satisfied. — Louis Goggans

at Off the Hoof

First off, be aware that Off the Hoof is a fairly far piece, especially on a bad rainy night and even if (like me) you already live way out east. Once at Off the Hoof, though, you'll be impressed by the crowds in the place (even on a bad rainy night), even if that makes for something like assembly-line service. Now, ready? The proprietors are specialists. Burgers are basically all they do, and their menu consists of infinite variations on that theme. (Anyone for ground boar? I kid you not.) I had their specialty, the Pat LaFrieda (beef) — which is, I was told, two kinds of steak, each ground and chopped into a coherent and well-textured patty. I had mine well-done with habanero pepper jack cheese simmered into the patty. Hearty and not overly spicy, even so. Several varieties of fries, too — including the sweet potato kind.

The Bi Bim Bop burger takes a cheeseburger and tops it with the veggies, beans sprouts, and egg. It is a beauty. And it is seriously messy. The addition of cheese and mayonnaise was a bit off-putting at first, but the flavors really come together nicely. If you are a fan of Bi Bim Bop, or just unusual burgers, it's definitely worth a try. Grab several napkins and a fork.

Others would have played it safe. I'm not others.

"Go for something basic," they'd say. "Develop a baseline for comparison."

Blackened patty. Blue cheese. Sriracha aioli. How could I say no? I couldn't, especially with all of the "Os" in Voodoo Moo-Moo eyeing me from the menu.

Plus, it's tough to even get a "basic" burger at Belly Acres, the newest player on the city's burger stage. The closest thing to standard is the Dare Ya, a bacon cheeseburger with "acre sauce."

Not sure if Belly Acres was going for a New Orleans kind of thing with the Voodoo Moo-Moo. It's a guess based on the name, the blackened-ness of the thing, and the presence of aioli. Also, on the menu it's sandwiched between burgers with Mexican and Italian influences.

But after the first bite, the name barely mattered. Something magical happened when the blue cheese hit the caramelized onions, the blackened beef, and the perfectly placed pickles. When it happened to me, I closed my eyes in a moment of involuntarily and very public burger worship. No, I was not transported to the Crescent City but to hamburger heaven.

The Voodoo Moo-Moo is just one daring burger on a list of daring burgers from Belly Acres. Chorizo. Waffle buns. Pork belly. Guacamole. Maple ketchup. The menu alone has put Belly Acres on the Memphis burger map, and if it maintains the quality I got Monday, it is destined to be a hotspot for a long time.

Newly opened Oshi features its own Asian-inspired burger, the Tora Toro. It is made from house ground Ahi tuna and is topped with "crushed" avocado, Asian slaw, sesame seeds, and umami mayo. It's super tasty, especially with a side of their thin and crispy French fries, which are served with a spicy ketchup that has its own Asian flare. For die-hard burger fans, it is a nice change from the typical beef patty and is maybe even a tad healthier? At the very least it is a great way to get your pescatarian friends to join you at the trendiest new burger joint downtown. — SG

Take charge! Why wait around on a burger like a chump? Charlie's Meat Market on Summer (aka the Avenue of Delights) will set you up with the latest rage: marrow burgers. There are a trillion recipes online, but basically you get beef bones and some chuck, knife the marrow out of the bones, salt and pepper the beef, and wad it all into patties. Grill, griddle, whatever. The result is a crazily moist, beefy burger (if you're like me) or a lipid-sodden meat sponge (if you're like my wife). Bring some acidity: a pepper relish, pickles, or a Malbec. — Joe Boone

at ECCO on Overton Park

ECCO on Overton Park's signature ECCO burger features a spicy Chorizo sausage patty and is served on a homemade bun. Inside you'll find melted manchego cheese and garlic aioli. It's quite sophisticated, but don't be fooled. It's not for the weak of stomach as it packs a punch. — SG

at 5 Guys Burgers and Fries

There are several gourmet options for gluten-free burger lovers these days, but when you're on the go and only have time for fast food, you may have to forget about the bun. In that case, 5 Guys has you covered. For those who prefer their food in a pile, 5 Guys will drop any of their burger combinations into a bread-free bowl, but the lettuce wrap is so much more convenient and burger-appropriate. The bacon burger is comprised of two flat-top-grilled burger patties and a healthy serving of crispy bacon. It's tasty, if a little plain, but it can be gussied up with grilled onions and jalapenos, and a wide range of condiments and toppings that are available at no extra charge. What's special about this burger is the care that's taken in wrapping it in large, pliable, but still slightly crunchy lettuce leaves. You may begin to wonder why anybody would ever use a bun in the first place. — Chris Davis

at 3 Angels On Broad

I must hurry and finish this blurb before I slip into meat-induced catatonia for I have just eaten a Colossus. The most aptly named burger on our list stands astride the menu at the recently revamped 3 Angels On Broad as a towering achievement in burger architecture. The burger is a half pound of lean chuck fried to perfection, married with smoked gouda, and topped with two thick strips of bacon. On the opposing bun, a garlic mayo base supports pickles, tomatoes, slaw, and a nest of thin, crispy fried onions. This is the burger to have if you've been fasting for a few days, or if you're ready to settle down into a long winter's nap. — Chris McCoy

This raw vegan burger may well be the healthiest burger in town. Finely ground seasoned cashews are shaped into a patty and covered in pickles, onions, ketchup, and mustard. It's served on a heart of romaine, but those with heartier appetites can request gluten-free bread. Pro tip: Order the bread on the side and take a bite with each forkful of cashew burger. To complete this super-healthy version of the all-American meal, order 2 Vegan Sistas' take on a chocolate milkshake — the Carob Smoothie, made with carob, tahini, and almond milk. — BP 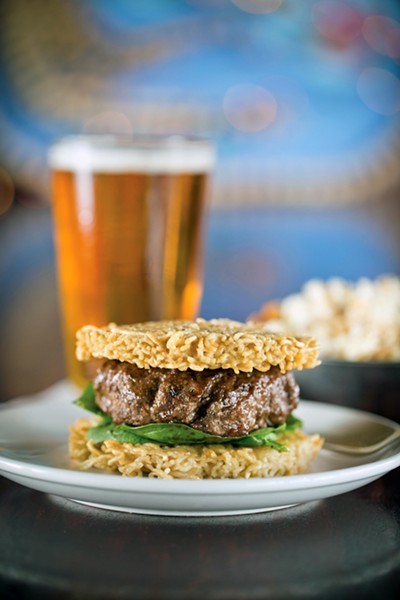 at South of Beale

Brittany Cabigao, one of the operating partners of South of Beale, says they added a Ramen burger as a special to their menu after hearing about the New York craze. Ramen noodle master Keizo Shimamoto blew people's minds with his bun made from crispy Ramen noodles at his restaurant Ramen Co.

The burger, topped with spinach and a homemade ramen sauce, was supposed to be a one-day thing, but proved so popular they added a second day. And while Cabigao doesn't think the Ramen burger would ever make it on South of Beale's regular menu, the burger will be on special this week as well as New Year's Eve. — SG

Any burger fan cannot consider him/herself truly serious without a visit to Tops Bar•B•Q. While many may be aware of their famous barbecue sandwiches and many may have heard that their cheeseburgers have a cult-like following, it is only a few who have dared to combine the two. For the Barbecue Burger, order a burger and ask for an ounce of pork, slaw, and barbecue sauce. Depending on which Tops you go to, the extra meat may be underneath the hamburger patty. Seth Agranov, founder of the Best Memphis Burger Fest, says, "The barbecue should be on top, not under the burger. Placement counts!" He suggests going "all in" and adding an extra hamburger patty.

It seems like a lot for one bun to handle, but the burger/barbeque combo goes down surprisingly well. It's so good that it may be gone before you get a chance to fully appreciate it. — SG