Herenton plans a long-term succession; ex-councilman Vergos has a short-term candidate: himself.

Memphis mayor Willie Herenton is sure he's doing a public service by running for reelection for a fifth term next year -- in other ways, that is, than just by offering his person.

"There's a value to having an incumbent run. If I weren't running, you'd have the same kind of free-for-all in the mayor's race you have in the 9th District," Herenton observed last week while attending a fund-raising event for General Sessions Criminal Court judge Gwen Rooks at the Silver Spoon club in East Memphis.

The mayor then went on to note pointedly that he had "no dog in the hunt" in that crowded race to succeed Congressman Harold Ford Jr., now a U.S. Senate candidate. (A large field is competing in the Democratic congressional primary, and Jake Ford, brother of the current congressman, has filed as an independent to oppose the eventual Democratic and Republican nominees in the general election.)

Looking beyond next year's planned reelection race, Herenton said he had one more service that he wanted to perform for the electorate -- one that, by implication, Representative Ford had deigned not to pursue. "I intend to start very carefully organizing the matter of a succession. We need to have some continuity in government," the mayor said.

The obvious corollary to that, of course, is that if he is reelected next year, his yet-to-be-designated successor would be running instead of himself in 2011, when Herenton would be 70 years old.

But that would be then. This is now, when -- says the mayor -- he's still rarin' to go. "I wish I was on the ballot this year," Herenton said, rubbing his palms together in a gesture of eager anticipation.

The mayor was reminded that getting him on this year's ballot has also been a desideratum for his longtime antagonist Thaddeus Matthews, whose "Operation Fed Up" apparently failed to meet this week's deadline for enough signatures (some 70,000 would have been needed) to force a recall election for the mayor.At last week's event, Herenton gave a convincing shrug of unconcern. "I really haven't paid much attention to that," he said.

Over the weekend, Matthews made one last effort to collect signatures, shepherding an organized effort at the intersection of Summer and Graham. He was realistic about his prospects, however, and had a fallback position. "I have 40,000 to 45,000 names, addresses, and telephone numbers that will create a database [so] that whoever the viable candidate next year will have a list going in."

Matthews said he had been advised by attorneys that his campaign should be judged not by a state law requiring 15 percent of the total number of county voters but by a city charter provision requiring only 10 percent of voters in the last city election.

By that standard, Matthews maintained, only 11,000 or so signatures would be necessary to qualify his referendum effort, and that was "probably" the number he would turn in.

"We may not win the battle, but we'll win the war" was Matthews' final word on Operation Fed Up. 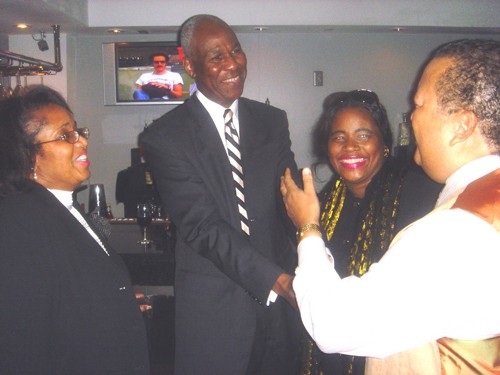 "Mr. Twelve-to-One": Meanwhile, another well-known local warrior was girding for what could turn into a more conventional battle for the helm of the city. Former two-term city councilman John Vergos, best known these days as the head man at the family-owned Rendezvous restaurant, says that, while he is by no means committed to a race for mayor in 2007, he wants to make known his "availability" as a possible successor to (or opponent of) Mayor Herenton.

Apprised of Herenton's intent to arrange a succession, Vergos commented drily during a lengthy conversation at the Rendezvous last week, "I didn't think that was part of the mayor's duties under the charter to designate a successor." He said he had talked with several other Memphians who, he believes, would be good candidates for mayor. Among them: Belz Enterprises head Ron Belz, Blue Cross/Blue Shield executive Calvin Anderson, hospital executive Gary Shorb, and all-purpose civic activist Gale Rose.

Another one would be Rick Masson, formerly finance director and CAO under Herenton and now director of the Plough Foundation. "But he's too close to the mayor and wouldn't be likely to do it," Vergos said.

Nobody else on Vergos' short list has committed, hence, his decision to make his own interest known: "The one thing we need to do is to avoid the kind of hacks whose whole life has been about politics. What the city needs is someone who has demonstrated competence, ability, and success in a variety of fields."

As it happens, Vergos thinks that's a fair description of himself. He points out that he has run a shipping company and developed real estate in addition to overseeing one of the city's most famous restaurants. He thinks that Memphis' need for sound leadership is such that demographic factors will play a lesser role among the voters than they have in the past.

"This city has tumbled into confusion," Vergos said. "It's ironic that the mayor has almost as much money in his campaign fund as the city does in its reserve fund."

As a councilman from 1995 to 2003, Vergos was known as something of a maverick, earning the nickname, in some circles, of "Mr. Twelve-to-One" for the frequency of his dissenting votes. He suggests that most of those votes had to do with zoning issues and questions of urban sprawl and points out that he has had his share of accomplishments, such as his work on behalf of the downtown bluff walk and improvements on Sam Cooper Boulevard.

As for Herenton, Vergos says the current mayor did well "in his first three terms," but has foundered since. He shakes his head and finds an analogy in a baseball hero of yore, whose last time at bat was, famously, a home run. "You have to do what Ted Williams did, quit while you're ahead."

And if he runs and gets elected, Vergos says he'll term-limit himself. "Eight years is about right."

With his expression of interest, Vergos joins a growing number of self-acknowledged mayoral prospects. Among them are current city councilmen Jack Sammons and Carol Chumney, both of whom concede their interest. Councilman Rickey Peete is also said to beinterested, and the names of Councilman Myron Lowery and former MLGW head Herman Morris have also received a fair amount of play.

Thanks but No Thanks: "Oh, I'm grateful to him as I can be," said Sidney Chism of activist David Upton. Not that the newly nominated county commissioner, an ex-Teamster leader and former party head, is best buds with Upton. In fact, the two are usually at odds over intramural Democratic Party matters.

That was Chism's point. He was crediting Upton for his yeoman's work on behalf of outgoing commissioner Walter Bailey, who allowed a Democratic primary campaign to be run in his name despite a state Supreme Court decision declaring him term-limited and thus ineligible to serve again.

Bailey, with 33 percent, and another regular-party Democrat, Darrick Harris, with 26 percent, ended up splitting a vote that might otherwise have coalesced against Democratic nominee-by-plurality J.W. Gibson, who, weeks before the election, was formally denied "bona fide" status by the local Democratic committee, on account of 10 years' worth of Republican Party activity. Chism, though, was one of several Democrats who supported Gibson and thought him both a legitimate convert and a good prospect for the commission. Hence the thank-you to Upton.

Chism made it clear, however, that his mock gratitude would not extend to supporting John Freeman, reportedly the candidate of Upton and other members of the party's Ford faction to be vice chair of a county Democratic coordinating committee for the August general election campaigns.

Chism ally Gale Jones Carson, the state Democratic secretary and Herenton's press aide, has been asked by party chairman Matt Kuhn to head that campaign and, insisted Chism, "The [coordinating committee] chairman ought to pick her own people to work with." Unsurprisingly, Carson agrees.