Why We Never Talk Anymore

How technology is killing the art of conversation. 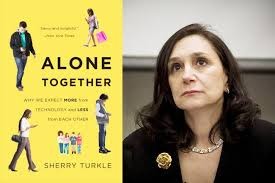 "Who in this cafe is talking?"

Sherry Turkle looks around a trendy Boston coffee shop. The walls are lined with old tomes, a thematic decorative touch, but the books aren't meant to be read. Aside from Turkle and a guest, one other couple is chatting. Most patrons are hunched over laptops and smartphones, working, texting, or watching something on a screen.

"So, we've got four people talking," she sighs. "Two groups of two. That's not very good."

Turkle, a professor of the Social Studies of Science and Technology at Massachusetts Institute of Technology and a prolific author, wants to have a conversation, about conversation — and why so few people seem interested in having it face-to-face anymore.

The crisis of conversation is at the heart of Turkle's new book, Reclaiming Conversation: The Power of Talk in a Digital Age. With it, she hopes to spark a discussion about what we lose when we settle for fleeting texts, sound bites, and status updates, instead of pursuing meaningful, nuanced human connection.

"I had a question. All these people were saying, 'I'd rather text than talk,'" Turkle says. "What happens if in business, in education, in romance, and child-rearing, you text rather than talk?"

A sociologist and clinical psychologist, Turkle has studied the link between conversation and empathy, and how conversation supports self-reflection. In her new book, she argues that our reliance on our devices endangers our ability to cultivate friendships, raise healthy kids, nurture intimate relationships, succeed on the job, and engage in civil discourse.

"Fortunately," she says, "there was a flood of quantitative studies that supported what I was saying." Turkle finished writing Reclaiming Conversation in New York while she was on sabbatical. She has written several other books that explore, as she puts it, "the intersection of technology and identity."

Through stories of various people, Reclaiming Conversation explores technology's insidious effects on chitchat. There's the father who — estranged from his child — accompanies her on a school field trip, only to spend it uploading photos and status updates rather than engaging her in conversation. There's the college sophomore who's terrified to apologize to her roommate in person. Instead, she 'talks' to her using Google Chat.

Then there's Turkle's own experience: how digital life affects her interactions with students. She implores them to visit her during office hours, but they won't. Instead, they send emails. Turkle says they think email allows them to "ask the perfect question so I can give them the perfect, more valuable answer." Face to face, Turkle's feisty manner belies the restrained tone of her book. "What am I supposed to do," she continues, "sit there at my machine and try to be perfect?"

She laments not only the "transactional" nature of technological communication, but the demise of conversational give-and-take — its wrong turns and discoveries that build understanding.

She also tracks more subtle effects of technology. "If I put my phone on the table," she says, gesturing at an iPhone in front of her, "the nature of the conversation will change."

Discussion, she says, becomes more superficial. People will shy away from serious talk. She cites a 2015 study by the Pew Research Center: 89 percent of all cell-phone users report taking out their phones during their most recent social interaction, and 82 percent of them said it detracted from their conversations. But they did it anyway.

Which is not to say that Turkle is some cranky technophobe. "I'll pit my iPhone against anyone else's," she says, allowing that she's as susceptible to technology's siren song as the next person. But unlike most of us, Turkle is unwilling to accept the way our devices limit our communication.

Despite the evidence she's compiled, Turkle insists the situation is not all doom and gloom. The solution is simple, she says: Talk to each other.  "It is time to make the course corrections," she writes. "We have everything we need to begin. We have each other."

Ethan Gilsdorf is the author of Fantasy Freaks and Gaming Geeks: An Epic Quest for Reality Among Role Players, Online Gamers, and Other Dwellers of Imaginary Realms.