Winter is coming, my friends. Dark clouds are building in the western sky. Alliances are being formed. Treachery and connivance are afoot. The battle — soon to come — could be epic and bloody, a mortal combat to see who will control the kingdom of Tom Lee, a vast and glorious prairie on the banks of the majestic Mississippi River near Castle Memphis.

On one side is the Memphis River Parks Partnership (aka Mr. PP), led by Lady Coletta and her powerful allies, including the Great Lord of the House of Hyde, the Downtown Memphis Commission of Great Visions, and the mercenary knights of Studio Gang — brought in from the northern kingdom to wreak havoc on their sworn enemies: the House of MIM. 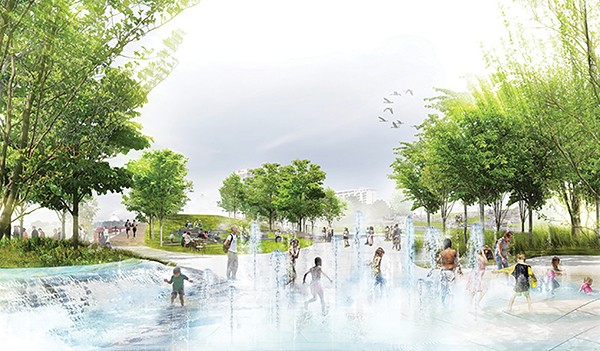 The House of MIM (aka Memphis in May), led by Lord James Holt, is enjoined in this coming battle by the Sacred Alliance of Motels and Hotels, the Viscounts of Beale Street, the Barons of Barbecue, the House of Rock, and probably the Duke of Earl.

In coming days, there will be negotiations held in the chambers of the great High Castle on the Bluff, seeking to avoid bloodshed and form a truce, however uneasy. Emotions are high. Anything could happen. The fate of Tom Lee hangs in the balance, my friends. Thoughts and prayers ...

For the record, the preceeding verbiage was satire. You know, what Webster's calls "the use of humor, irony, exaggeration, or ridicule to expose and criticize, particularly in the context of contemporary politics and other topical issues." We do that a lot at the Flyer, because, well, if not us, who else in town is going to provide the snark essential to the civic process? I mean, someone has to point out when the emperor is going commando, right?

I mention this, because a cartoon by our illustrator and master of visual snark, Greg Cravens, poked fun at the House of MIM a couple weeks back, and a few of their friends got upset. Some said the Flyer was "attacking" Memphis in May.

No. Believe me, if we attack you, you'll know it. It was satire, the same kind of stuff we've thrown at MRPP on several occasions. I mean, our Chris Davis was the guy who dubbed them "Mr. PP" in the first place. We've also taken shots at Studio Gang's idyllic bird-infested visuals and the new park signage that's already been installed. It's what we do.

But that's different from our news coverage, which has highlighted the details of the MRPP design and MIM's concerns with it. We've reported extensively and objectively on the battle for public opinion that's ongoing between the two organizations. See Toby Sells' story in this issue for another example.

That said, I'm excited and optimistic about MRPP's overall plan for the riverfront, which includes renovations of all the city's public lands along the river, and the linking of Greenbelt Park, Mud Island, the Fourth Bluff, Tom Lee Park, and MLK Park. It's a big and ambitious design, and because of that, it has drawn fire from several sides.

But the central sticking point is Tom Lee Park, the 30-acre, mile-long, flat, open space now occupied by a few jogging paths and not much else. MRPP's plan, as most people know by now, involves adding various elevations, a sheltered facility, a water feature, a wildlife habitat, and lots of trees. Memphis in May, understandably, likes the park the way it is, because a big field is much more conducive to its month-long event, which includes a music festival and the World Championship Barbecue Cooking Contest, both of which sprawl over most of the park. How's that going to work with all those trees and other stuff, they ask. That's the $70-million question, isn't it?

We at the Flyer also support Memphis in May. It is a civic treasure that brings lots of people and money to town, and we believe all concerned should be able to figure out a way to keep the celebration Downtown and also reinvent the city's riverfront. Tom Lee Park belongs to all of us, including those who use it the other 11 months of the year. Let's get a deal done. May is coming.