In 1949, classics professor Joseph Campbell published The Hero with a Thousand Faces. He compared hundreds of different stories and myths from all over the world — from Gilgamesh to Perseus, Beowulf to Odysseus, Jesus to Mohommad — identifying common elements and structures that seemed to serve some universal psychological need. The hero is introduced in his Ordinary World; he is Called to Adventure but Refuses the Call, only to change his mind after a Meeting with the Mentor. Then he Crosses the Threshold into an unfamiliar world, meets Allies and faces Tests, which ultimately lead to a journey into the underworld where he faces an Ordeal and gains a Reward. But the Road Back is fraught with danger (usually a big chase scene), often resolved by a Leap of Faith, leading to a Resurrection, when the hero comes back from the brink of (or, in the case of Jesus, actual) death, to Return home, where he assumes his place in society as a wise and strong leader.

George Lucas read Campbell's work while a student at USC, and he applied Campbell's ur-structure to Star Wars. By the mid-'80s, the secret was out, and everyone in Hollywood was creating self-conscious versions of what Campbell called the "monomyth." In as much as the Hero's Journey got filmmakers to pay attention to story structure, it has been a good thing. But its ubiquity and the belief that it was a magic formula for success has created a stultifying sameness in screenplays.

The other problem with the Hero's Journey is that it's always about a he. There are goddesses aplenty, but female mythological heroes, such as the Greek huntress Atalanta, are rare. What happens when you test the monomyth by setting a woman on the Hero's Journey?

Wonder Woman is the third-oldest surviving comic book hero. She made her debut as a Nazi-punching feminist eight years before Campbell's book. And yet, 40 years after Christopher Reeve donned the Superman tights and 28 years after Tim Burton brought Batman to the big screen, we are only now seeing a Wonder Woman feature film. Swamp Thing got a movie before Wonder Woman, but maybe we had to wait for the stars to align for Diana Prince to get a treatment as good as Patty Jenkins' film. 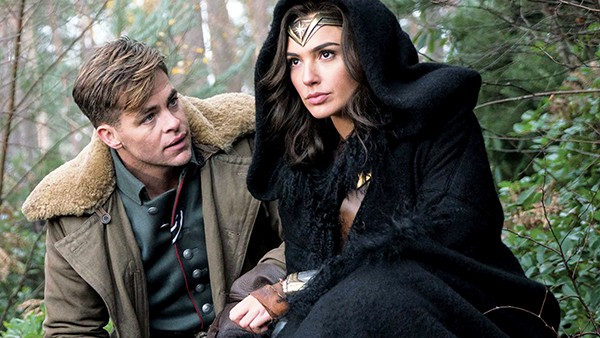 The only bright spot in the turgid Batman v Superman was Gal Gadot's cameo as the Amazing Amazon. Now that she's carried a $143 million production on her chiseled back, it's clear Gadot is a movie star of the first water. Her jawline is more heroic than Ben Affleck, and her face is friendlier and more expressive than Henry Cavill. She's just as great when she's wrapping boy toy Steve Trevor (Chris Pine) in her magic lasso as when she's storming across no man's land in 1917 Belgium, but Gadot's best scene is when the Amazon princess tries ice cream for the first time. Diana's confident, determined gaze melts away for a moment, and we can see her think "maybe the World of Men isn't so bad after all!"

Wonder Woman was formed from clay and given life by Zeus, but godlike perfection is boring, so Jenkins and writer Allan Heinberg use Diana's naive wonder to endear her to the audience. Wonder Woman is a Hero's Journey, but with its multiple flashbacks, it's not a conventional one. Diana doesn't Refuse the Call to heroism in the beginning — she waits until after she has seen the destruction of war and the corruption of men. For Diana's Ordeal in the underworld, Jenkins and Heinberg turn to the Gospel of Matthew. Ares (David Thewlis) shows her the world and points out, correctly, that she's not like these puny humans. If she wants to end suffering and impose order, she can do it by force and rule as the awesome queen she is.

Diana, like Jesus, rejects the temptation. Despite the fact that these humans — these men — don't deserve her perfection, she's got to do things the hard way. The difference between a tyrant and a hero is that a hero leads by example, and men — humans — follow willingly. That's what it takes to bring about a paradigm shift, and that's what the Hero's Journey has always been about. Making the Hero with a Thousand Faces a woman proves the primal power of the oldest story by opening it up to half the world. After untold thousands of years, it still works. As we filed out of a packed matinee screening, I heard a teenage girl exclaim, "I'm ready to go kick some ass!"