The Workers Interfaith Network (WIN) has a new home for its worker's center and a new laser focus on a trade deal currently up for debate in Congress.

The worker's center, which helps low-wage, non-union workers organize for better wages and benefits, has a new home inside First Congregational Church in Cooper-Young. For years, WIN and the center operated out of an office near Brooks and Airways.

Moving was a slow process that started in August 2013, organizers said, but the First Congo location provides a centralized office for the community and the organization's partners.

Emilie Bowman, an organizer with WIN, said now that the office has reopened, worker's center meetings can resume. Along with that comes new worker complaints, ranging from wage theft to loss of benefits. 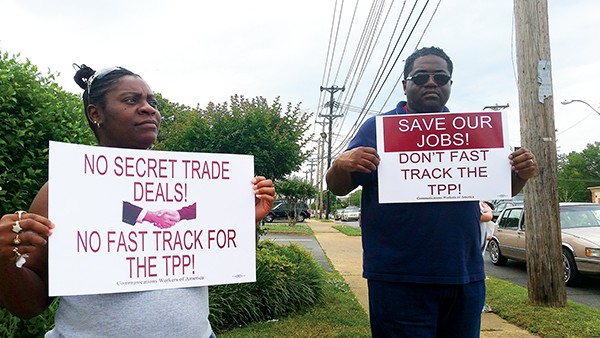 "We want to let people know that we were in operation again and taking cases," Bowman said.

The new office seems to have reinvigorated the staff as they resume taking new worker complaints for their services. As more workers are informed about where the new office is, "workers who are having trouble are able to show up once more," Bowman said.

Worker's center meetings are held every third Thursday. Workers can talk with organizers and volunteers about issues with their jobs. The center also hosts "know your rights" seminars, which focus on labor and work laws.

Since the worker's center opened on May 1st, its parent organization, WIN, has turned its focus on Rep. Steve Cohen and the fast track authority that's currently up for debate in Congress. The debate swirls around the Trans-Pacific Partnership (TPP), a trade agreement among 12 countries, including Canada and Japan. The fast track authority would give the U.S. president the power to submit trade deals that Congress could not amend — only approve or deny — and make way for the Trans-Pacific Partnership.

"Previously, Rep. Cohen had made it clear that he was against 'fast track action' within Congress, but now he's started to waffle," Bowman said. "He said he was unsure [if] he would support fast track for the Trans-Pacific Partnership or not. It is our opinion that the Trans-Pacific Partnership would be a terrible trade deal for Americans. It would push more jobs overseas. The fast track process just completely overrules the democratic process we have in this country."

Since 1974, previous presidents had the option of fast track authority. The last incarnation expired in 2007. However, some members of Congress believe that, taking lessons after the North American Free Trade Agreement (NAFTA), this may be the chance to prevent outsourcing. Others, including Barack Obama, have said the TPP is good for the middle class.

On Friday, members of WIN and concerned citizens held signs at the corner of Park and Highland to protest the TPP and fast track authority. Tom Smith, the lead organizer for a local chapter of the communication workers union, said manufacturing jobs are the first ones to go overseas.

"After NAFTA, Memphis lost 20,000 manufacturing jobs," Smith said. "Just this week, we lost nearly another 600 jobs at Conduit Global. It would cost us more jobs."

The proposed trade agreement isn't just a national issue, according to Smith. He said local government officials need to weigh in, too.

"I think this is an issue for the city council, those running for mayor, all the way up to Congress," he said. "The city of Memphis is giving away millions of dollars in incentives to bring light manufacturing here, to bring call center jobs here, and those are the types of jobs we will lose if TPP passes."

WIN will hold another TPP protest on Friday, May 15th at 4:45 p.m. outside the federal building.