Working — and Drinking — From Home

Like a lot of people in my profession, I work at home. So I was social distancing just fine before the entire country started doing the Covid Shuffle. I hadn't even seen my handlers at the Flyer since the Christmas party, and now it's spring.

Although it's starting to feel like summer. The charming Mrs. M. works for a school that has temporarily gone online, and the good people at Sewanee have shuttered the fortified mountain compound — so we're all on top of each other. There are three people in my formerly isolated, book-lined fortress of solitude. I love them dearly, you understand, but it's hardly the "social distance" for which the CDC is calling. 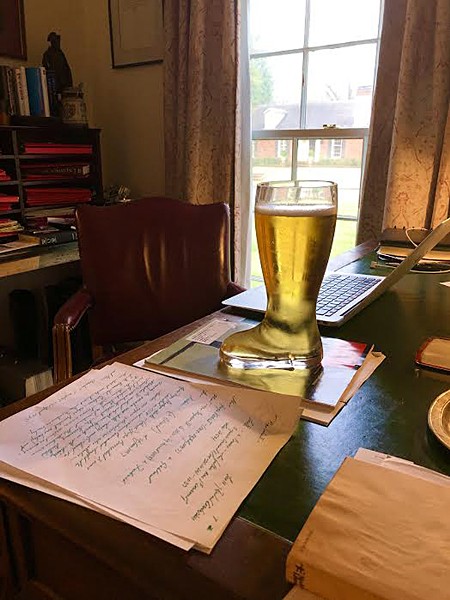 I'm writing an introduction to an old book by Sir Richard Burton — no, not the actor who married Elizabeth Taylor twice — the explorer. He was known at Oxford as "Ruffian Dick," which lends nothing to my point, but I thought that you should know. When Burton left his native England to make himself obvious in Africa, he knew that he'd be exposed to diseases for which his pasty white behind had no natural defense. While his system was being "seasoned" (a euphemism for getting some far-flung virus and not dying from it) he warded off the crud with ... brandy. And lots of it. Later this would be refined into the gin and tonic.

Our own pilgrims at Plymouth — those infamous buzz-kills — drank mostly beer because they didn't trust what was in the water. Harvard's dining hall once only served beer for the same reason. A practice they had to stop because, well, you know how undergraduates get.

My system has been mildly seasoned, but it's nothing I picked up in Latin America or North Africa. I got zapped smack in the middle of ZIP 38111 when I built a swing set for Littlebit and was eaten alive by mosquitoes and contracted West Nile Virus. It sucked. Fever, cold sweats, and everything ached. Literally everything. I'm not sure how it manifests in women, but it felt like someone had stepped on my cods in a work boot. Sure, I lost 15 pounds, but I was assured at the time that it wasn't in a good way. For all that, the doctor told me that, being in my mid-30s at the time and relatively healthy, nothing but my social calendar was in any real danger.

More annoyingly, West Nile, which practically has to be injected into the system to do its thing, has not remotely seasoned me against the current airborne COVID-19 dread. Like everyone else, I'm social distancing, even if, with the house full of teleworkers and students, it doesn't feel very distant.

The CDC will tell you that the only thing that G&T and beer actually cure is sobriety. And that's true enough. Still, it got me wondering — could we inoculate ourselves and save the local economy by drinking loads of Old Dominick Gin and going curbside with growlers of Wiseacre on Broad, Memphis Made in Midtown, High Cotton in Downtown, Ghost River on South Main, Crosstown in, well, Crosstown, and Meddlesome in the far east? Is it time to rally?

You're damn right it is! We've hit the spot where the economy is about to crumble under the weight of, if not the coronavirus, certainly the fear of it. The megastores and the national outfits have the fat to weather the storm. Local businesses don't. We really are all in this together, so raise a drink that's locally sourced, even if we keep our distance.

The upshot is that if you've ever wanted to try the fabled three-martini lunch of our ancestors, this is the time. Why not? You aren't going anywhere. Although, I'd suggest keeping the cocktail glass or the odd boot of local brew out of shot of your laptop's camera. You're still on the clock.