Working to Bring Confederate Statues Down.

Despite threats and intimidation, we will work together to bring Memphis’ Confederate statues down. 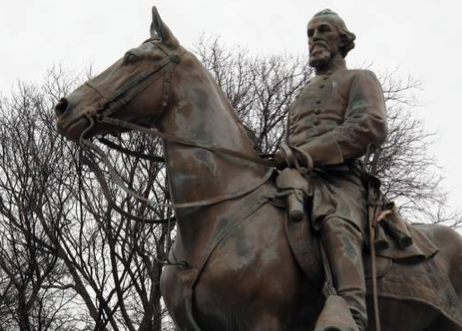 Memphis, my hometown, sits on a bluff overlooking the Mississippi River. In the center of that bluff sits a statue honoring Confederate President Jefferson Davis with an engraving that reveres him as "a true American Patriot." This engraving is an error. In actuality, Jefferson Davis was a condemned traitor, slave owner, and racist. Far from an ideal American or a patriot.

Recently, I called for a public meeting for the people of Memphis to discuss our collective action to have the statues of Confederate General Nathan Bedford Forrest, first grand wizard of the Ku Klux Klan, and Jefferson Davis removed from our public parks. There is no justification for these statues to continue to stand. Removing statues does not erase history. Their names will still live in history books, museums, and in the memory of their modern-day followers. Built decades after the Civil War ended, these statues were not raised to remember history but to reestablish the prominence of the Confederate South. If we want a Memphis that is inclusive and equitable for all, the statues must come down.

Last week, Karl Oliver, a Republican state representative from Mississippi, said Louisiana leaders and anyone anywhere who moves Confederate statues should be lynched. Oliver represents Money, Mississippi, the city where Emmett Till was murdered by white men who were protected by their government. While Oliver has issued a vapid apology, the call for violence has been echoed throughout the country, and support for him continues.

I take Oliver's threat of assault personally. Any elected official threatening assault against anyone should be forced to resign. He has made me, personally, feel unsafe and unprotected. In light of the recent murder of black college student Lieutenant Richard Collins III by a white supremacist, Oliver's words are especially dangerous. His apology has no weight because you cannot unring a bell. While Oliver might not take up the noose himself, there are many who are emboldened by his call to action.

Threats against black people who fight for change are by no means new. For example, last summer, a white man threatened to throw me in the Mississippi River for speaking in support of the Memphis bridge protest. When we fight for justice, we put our lives on the line.

A week ago, Monday, I arrived at Memphis Park, formerly known as Confederate Park, where the Jefferson Davis statue stands. I was there for a television interview regarding the upcoming meeting to remove Memphis' Confederate statues. During my interview, a group of Confederate memorabilia-wearing and flag-holding white people walked to our side of the park, and one of the men approached us. He stood directly behind my interviewer and waved his flag. When the interview was over, he attempted to greet me. I did not give my name but remained polite. The man said: "Take care of yourself." I stiffened, hearing a threat in his voice and wondering if he was there to answer Oliver's call to action. For a moment, I felt the fear which they hope will keep us in a state of inaction.

Unfortunately for people like the Confederate apologists I faced today and Oliver, I will not give up this fight. I will not give up even though I know that our country uses violence and murder to silence black people. I know that as I continue to engage in this movement to bring down these hateful reminders, my name will become familiar to those who will do anything to keep them where they stand. As Ida B. Wells, Fannie Lou Hamer, and others who have come before me, I am willing to stand in harm's way for justice.

We invite all supporters to attend the community meeting to decide the next steps for Confederate Statue removal on June 20th at 6 p.m. at Bruce Elementary School. Updates on this cause are shared on the Facebook group Memphis for Removal of Confederate Statues. While the City of Memphis awaits news on the waiver request for Nathan Bedford Forrest statue, we will brainstorm and act upon ideas brought by the public. For more information on the Tennessee statute that governs the statues, review the Tennessee Heritage Protection Act online.

I won't be intimidated by the threats, and I know my fellow Memphians won't be either. I hope to see us working together toward true racial reconciliation and progress through the removal of the Confederate statues and achieving equity in education and business contracting, and the many more steps we must take to get there.

Tami Sawyer is a social justice activist, speaker, and writer working for equity and equality. This story is supported by MLK50: Justice Through Journalism, a yearlong reporting project on economic justice.