You can always tell a survivor of the Cola Wars by their sallow complexion, bulging waistline, and rotting teeth. Back in the 1980s, Coke and Pepsi, two competing manufacturers of carbonated sugar water, spent millions of advertising dollars to convince the world that their product was superior, when in fact, the two were virtually indistinguishable. In the summer of 2016, we find ourselves caught in the crossfire of a similar conflict, only this time with superhero movies.

In retrospect, the studios flying the Marvel and DC flags owe much of their success to Bryan Singer. The director proved he could handle an ensemble cast with his 1995 indie hit The Usual Suspects and then used those skills to bring Marvel's flagship superhero property X-Men to the big screen in 2000, which mutated Aussie musical theater actor Hugh Jackman into an international movie star and paired Patrick Stewart's Professor Xavier with his frenemy, Ian McKellen's Magneto for the first time. This year alone, we've seen three films that borrowed heavily from Singer's first two X-Men films: from the boring Batman v Superman: Dawn Of Justice to the more successful Captain America: Civil War to the genre-expanding lewdness of Deadpool (who, technically at least, is an X-Man himself).

Singer did two X-Men movies before leaving the franchise for the ill-fated Superman Returns, leaving Brett Ratner to butcher the resolution of the Dark Phoenix storyline in The Last Stand. Since then, Hugh Jackman got a pair of spinoff stand-alone Wolverine stories that proved imminently forgettable, and Singer returned to the series as a producer for a prequel trilogy, which got an unexpectedly spiffy start with 2011's First Class. Singer directed 2014's Days of Future Past, which featured Wolverine time traveling back to 1973 to prevent a mutant genocide, and now the prequel series concludes with X-Men: Apocalypse. Or probably concludes. Who knows with these things? 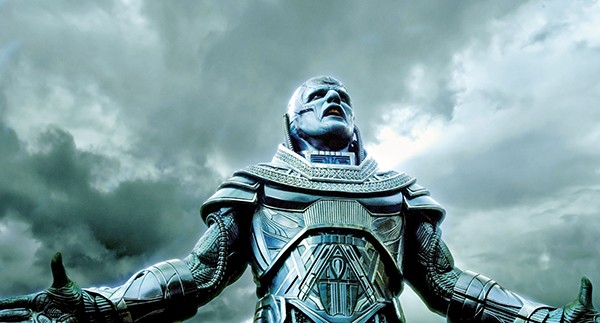 The good news about Apocalypse is the same as the bad news: It's a Bryan Singer X-Men movie, with all that implies. The cold open takes us back to 3,600 B.C.E., where the original mutant, Apocalypse (Oscar Isaac), is in the process of absorbing another mutant's healing powers to gain immortality, when he is imprisoned underneath a collapsed pyramid by rebellious slaves. Singer's brief foray into Pharaonic times is 10 times more rewarding than all of the misbegotten Gods of Egypt.

Meanwhile, Magneto's former protege Mystique (Jennifer Lawrence) is running an underground railroad to get mutants out of communist Eastern Europe, where she meets Nightcrawler (Kodi Smit-McPhee) and inadvertently helps bring the teleporting Catholic into the fold of Professor Xavier (James McAvoy), who is training Scott Summers (Tye Sheridan), who will one day become Cyclops, the leader of the X-Men. Summers' slowly blossoming affection for Jean Gray (Sophie Turner, aka Sansa Stark from Game of Thrones) as the showdown with Apocalypse looms is the film's most deftly executed subplot.

Due to the current state of Marvel copyright case law, the X-Men franchise is in the hands of 20th Century Fox, and thus is not a part of the Disney conveyor belt. That works in Apocalypse's favor, highlighting Singer's distinct look and feel. But Apocalypse still feels like a warmed-over version of what worked better 16 years ago. McAvoy and Fassbender work hard at animating Professor X and Magneto, but they still can't fill the X-shoes of Stewart and McKellen. Lawrence brings humanity to Mystique, but I miss the chilly cunning of Rebecca Romijn. Only Nicholas Hoult as Hank McCoy improves on the previous incarnation of Beast. And Storm is as underutilized as always. Apocalypse arrives in a season when even single-hero movies such as Captain America have expanded into super team-ups. Whether you choose Coke or Pepsi, it's still the same brown sludge.