You Were Never Really Here

There's an old saying that the difference between acting for the stage and the screen is that stage acting is about acting, but film acting is more about being. The intimacy of the camera exaggerates every nuance on an actor's face, so emotions that seem natural on stage come across as grotesque and fake on screen.

There are few better be-ers in the business than Joaquin Phoenix, and You Were Never Really Here finds him be-ing all over the place. Phoenix plays a demobbed Iraq veteran named Joe who has been reduced to a shell of his former self by PTSD. Director Lynne Ramsay cannily introduces us to his tortured point of view in a long opening sequence where we see visual fragments of the aftermath of something horrific that recently happened in a dingy hotel room in Cincinnati. Joe, the battle-scarred soldier, is officially a civilian again, but he is still a man of violence and a consummate professional. Officially, he lives in New York caring for his octogenarian mother, portrayed with a charming playfulness by Judith Roberts. But his bloody work makes him a frequent traveler who maintains airtight operational security. He's able to breeze into town, commit multiple murders, and evaporate like a cloud. 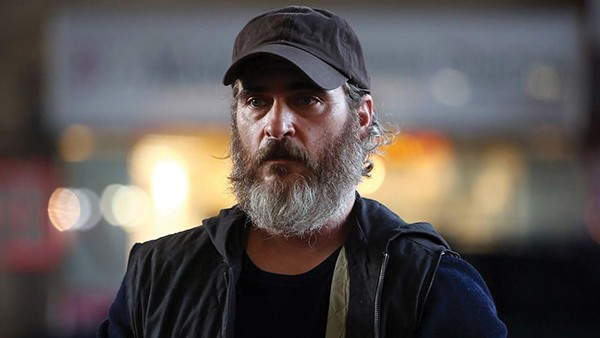 Ramsay's film, which was lauded at Cannes 2017 and picked up by Amazon Studios, has been compared to Taxi Driver. Indeed, there's a fair amount of Travis Bickle in Joe. He moves easily through the underground of a New York that is teeming with humanity, but his extreme alienation has begun to wear on his sanity. Joe pops pills with abandon, but they do little to keep the vivid flashbacks at bay.

I think a more apt comparison would be to Luc Besson's Léon: The Professional. Joe's work is dirty, but the people he's whacking on the head with his preferred weapon, the ball-peen hammer, mostly deserve what's coming to them. Joe's current specialty is finding missing girls believed to be in the clutches of human traffickers, rescuing them, and dispatching the kidnapers with extreme prejudice. He deals in cash, cutouts, and dead drops, and if the client requests "make it hurt," all the better.

Like Léon, this detached professional finds himself in a situation where he's suddenly responsible for the well being of a young girl. Nina Votto (Ekaterina Samsonov) is the runaway daughter of a New York State Senator (Alex Manette) who has been imprisoned in a luxury brownstone. Leon finds her easily and, in a brilliant sequence told mostly by security camera footage, cleans out the nest of sex slavers in a particularly brutal manner. But then things go badly awry. Nina's captors were much better connected than anyone Joe has ever taken on before, and Joe's little world comes crashing down on him, along with what is left of his psyche.

Ramsay's work is as chilling as it is technically flawless. She's an avid practitioner of the Kubrick Stare — Phoenix seems to stay blank and immobile for an uncomfortably long time before springing into ultraviolence. She and cinematographer Thomas Townsend get a lot of mileage out of symmetrical shots contrasting Joe's increasingly disheveled and bloody presence and the domestic banality of Brooklyn and New Jersey. Radiohead's Jonny Greenwood composed the floaty score, but the soundtrack makes great use of New York's terrible plague of soft rock radio, both for creepy counter-scoring and to create a sense of place.

You Were Never Really Here seems like a rebuke to the John Wicks of the world. The Keanu Reeves character is a dapper professional killer with a supernaturally competent supporting cast based out of a chain of luxury hotels. Joe, on the other hand, takes his payoffs in brown manila envelopes hidden in the backrooms of bodegas. John Wick stages mass murder as a kind of hyper-violent ballet. Director Ramsay is more concerned with the aftermath of violence. Her elliptical editing reveals the effects — bloody hammers, personal effects gathered for clandestine disposal — without glamorizing the cause. And while Wick is portrayed as a kind of benevolent, detached angel of death, Joe is haunted by the horrors he has seen and caused. Ramsay's version of the professional may not be as commercial as John Wick's, but it is no less slick — and much more truthful.