I have my finger on the trigger as the cool October breeze whizzes past, and there's a collective enemy that me and my newfound brethren — that is, the people sitting next to me — have to combat. Zombies are invading Shelby Farms, and it's up to us to kill them.

The Memphis Zombie Hunt, part of Shelby Farms Park's Spooky Nights series, is offering wannabe zombie hunters the chance to shoot the undead with paintballs fired from moving vehicles. A trailer pulled behind a military truck moves slowly through a designated path in the park, lined with targets for visitors to shoot from fixed paintball guns that move on a swivel and point out from the vehicle. A tour guide moves things along, offering commentary and storyline.

The undead are moving targets, and they're alive — well, live actors, that is. The actors come from Freed-Hardeman University's social club Xi Chi Delta, which Memphis Zombie Hunt owner — and "head zombie hunter" — Jonathan Edwards help found in 2002. The actors are paid in donations to their annual mission trip to Honduras.

"We're one of the very few haunts that actually pay all of our [actors] — they're not volunteers," Edwards said. "We give the club a big donation of $5,000, and then we give the individuals $25 a night that goes toward their individual fund-raising campaigns as well."

The zombies get shot several thousand times a night, two days a week, since the haunt is open Fridays and Saturdays throughout October. But don't worry — all actors are covered in safety gear with helmets, perfect for the now-standard (thanks in part to The Walking Dead) headshot to take down zombies. The ride is like a real-life video game, Edwards said.

"This is the only time you can shoot people and it be okay," he said.

Each year, Edwards said, a haunt has to change at least 45 to 50 percent in order to feel different from last year's event. Memphis Zombie Hunt scenes can be tweaked and changed every time a new set of visitors goes through. At one point, the survivors must fend off an escaped inmate from the Shelby County Correction Center. Without giving too much away, there are enough surprises to scare zombie hunters of any age.

"We try to give different aspects of what it would be really like if there was a zombie apocalypse, and all we had was a trailer, a military truck, and guns," Edwards said. "'Let's just go drive through town and shoot at [zombies].'"

The haunt also has the conservatory of Shelby Farms in mind: the paintballs are custom-made to be 100-percent biodegradable and, while they do illuminate, the paintballs dry clear. The hunt is also mindful of the course itself, staying away from the horse stables or any water sources for the fish.

As for the best zombie-killing strategies, Edwards said pop culture has the perfect answer.

"Body shots disable. Head shots kill," he said. "And every shot to the helmet is going to splatter." 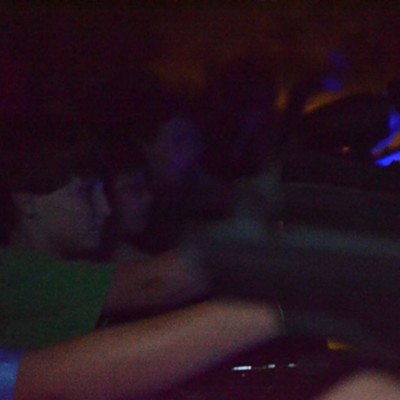 Frank Chin photographed some Halloweeny spooks and zombies out at Shelby Farms. You can shoot 'em with a paint gun and save Memphis from a horrible fate.